It's been almost 3 weeks since I took my first crack at predicting the 25-man for the postseason, and with all that's happened since then and the fact that I can't jinx the Yankees' playoff chances now, I figured it's as good a time as any to update the list.

- Cervelli comes off the roster as a guarantee because of the concussion and the continued uncertainty surrounding his condition.  Everything so far makes it seem like the Yankee are going to keep him out of action as a precaution, which is a smart move considering how many he's had.  But I kept him eligible on the off chance that he does improve.  If he can go, you know the team would rather have him as the backup catcher.

- With Cervelli out, Jesus becomes the obvious choice to replace him because he can catch and he adds bench depth with his power.  Last night showed that teams are going to be willing to pitch around other guys to test him, but without other viable options Joe might as well give the kid a shot.

- I also removed Phil Hughes as he's been scratched from 2 straight starts and last night we learned that an MRI showed inflammation in his back.  He had already been struggling of late, almost certainly wasn't going to get a postseason rotation spot, and the bullpen hierarchy is already pretty much set.  Add in this new injury, and it doesn't spell a lot of opportunities for Phil to get used.

- So with Phil out, I inserted Luis Ayala as the new bullpen arm.  I had him as a Wild Card in my bullpen hierarchy post, and yesterday he continued his strong September showing with 2 Ks in a tight spot of Game 1 against the Rays.  He's as good as anybody else they could put into that position.

- I feel more comfortable saying that Jorge, Chris Dickerson, and Hector Noesi are locks than I did 3 weeks ago, and I still feel comfortable saying A.J. is out.  His meltdown in the 4th and 5th innings of his last start were surely the nail in the coffin.

- 2 intriguing question marks are Austin Romine and Raul Valdes.  Romine's gotten some work behind the plate since Cervelli went down, and will probably get more over the next week with the division wrapped up.  If Joe doesn't feel confident that Jesus can step in and catch if needed, he might bring Romine and go with a shorter 'pen.  And since finally being dusted off and used as a bullpen option, all Valdes has done is strike out 5 of the 11 batters he's faced in 2+ scoreless innings of work.  Maybe he slots into the #2 LOOGY role if Joe wants another southpaw.

This Is Why Games Are Won On The Field

"The Yankees will never get back with this team for the whole season.  Colon and Garcia are washed up.  They'll get hurt and won't be able to replace guys.  The Yankees are too old."

Well how do you like them apples, you bunch of Bahhston nuthuggers?  A week to go in the season and your boys are drowning in their own choked up puke while the Yankees are celebrating on their homefield in ill-fitting AL East title shirts.  So enjoy battling it out down the stretch with what's left of your pathetic rotation and even worse bullpen, and take pride in the fact that you won the season series against the Yankees.  They'll be busy popping bottles in the locker room and getting ready for the ALDS.

P.S.- How sick was Reggie's postgame locker room celebration swag last night?  Dude was KILLING it next to A-Rod while he was talking to Tim Kurkjian.  Hat cocked, sipping from the bottle.  SWAG!!! 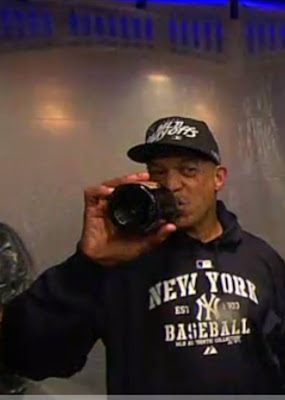 (Screen cap courtesy of ESPN.com video)
Posted by Unknown at 8:09 AM No comments: