The Yankees got 7 innings of good work from David Phelps on Thursday night in the series opener against the White Sox.  It was the first step in an effort that Joe is going to have to undertake to get more out of his replacement level 3-5 spots in the rotation if he's going to avoid burning out his bullpen before the end of summer.  He had a chance to take another step in that direction this afternoon with Vidal Nuno's latest start, and like Phelps before him, Nuno gave his team distance and quality in his start.  A late comeback and a bullpen bounce back from D-Rob and the Yanks had their first win of the series.

- It didn't look like Nuno was going to make it out of the 1st inning.  He gave up hits to the first 3 White Sock batters and they put 3 runs on the board thanks to a ribbie double, sac fly, and RBI groundout.

- Chicago singled to lead off the 2nd and the 3rd innings as well, but were never able to put enough hits together to lengthen the lead.  Nuno got big outs when he needed to and kept the game close for his offense.

- The offense flat out didn't show up to support Nuno at all.  They got their first baserunner on an error in the 3rd, their first hit on a Mark Teixeira double in the 4th, and never mounted much of a threat against John Danks through 7.

- They did finally put 2 runners on in the 8th (#smallvictories) but had 0 runs to show for it.  The bullpen picked up where Nuno left off and kept it a 3-0 game going into the 9th, and that's when the offense finally decided to show up.  With 2 outs, they put together 3 hits and 1 walk to generate 3 runs and send the game to extras.  Brian McCann had the big game-tying RBI single.

- In the 10th, Jacoby Ellsbury got the big hit to hopefully break him out of his month-long slump.  He smacked a 1-0 splitter for his second home run of the season to give his team a 4-3 lead, and D-Rob made amends for last night's blown save by holding down this win with 3 strikeouts in the bottom of the 10th.

A few things from yesterday and last night:

- Michael Pineda was feeling good after his latest bullpen session, so via George King, the decision has been made to move him up to facing live hitters this weekend.  He'll most likely throw some live BP today at the Tampa complex.

- On the international FA front, the Yanks are reportedly "close" to signing 17-year-old Korean shortstop Hyo-Jun Park to a $1.1 million deal.  Scouts say he's a very good fielder with a line drive/contact-driven approach at the plate, and he will count against this year's spending cap if the deal becomes official.

- Brian Roberts fouled a ball off his right knee last night and was removed early after limping around on it for a few innings.  X-rays were taken and came back negative, but I imagine he'll get today off.

- Via Jack Curry, last night's loss was the first for the Yanks when leading after 8 innings this year.  They were 21-0. 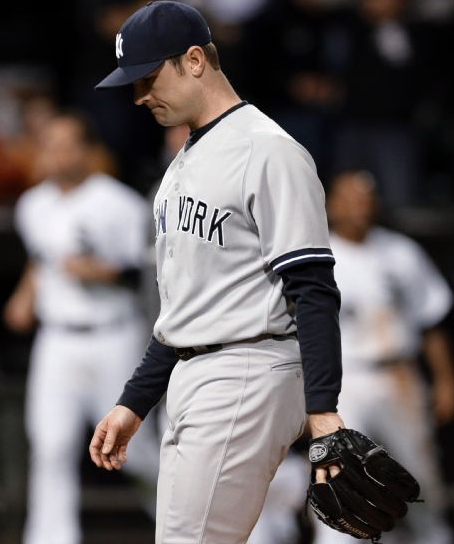