Something To Consider Regarding The Soriano Contract

I never thought about this possibility when discussing the opt-out clauses in the deal.  Luckily, there are other bloggers out there smarter than me.  Observe:

"Because the contract is end-loaded, it isn’t likely that Soriano’s future performance would ever surpass his salary, so if the right hander were to allow his ego to send him back into the free agent market, the Yankees would be freed of the risk associated with the length of the deal. In other words, the Yankees would wind up with one great year from Soriano and Type-A free agent compensation, which means they’d swap one draft pick for two. Should that happen, the Yankees’ end of the bargain would look much better, which is exactly why the opt outs are probably more in their best interest than Soriano’s (i.e., it provides him with a temptation that isn’t likely to work toward his benefit)." (via The Captain's Blog)

Touche, William.  Touche.  That scenario playing out would be a win-win-WIN for the Yankees in that they would get maximum performance from a guy with closer talent (presumably in helping them go deep into the postseason), wouldn't have to suffer through the full $35 million, and would get compensatory picks if and when Soriano goes back into the FA pond that will help ease the suffering of all the draft pick lovers out there who are undoubtedly still crying in their soup as I sit here and write this.

Alright, I'm fully on board with this deal now.  Let's get this motherfucker fitted for a cap and jersey and get him out there now.  Just say a few "Hail Marys" for his elbow health and then run him out there in 2011 until his arm falls off!
Posted by Unknown at 3:38 PM No comments: 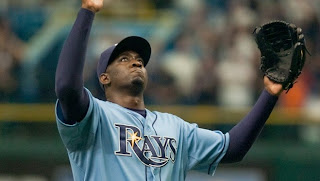 (The new guy)
Just a week ago we had Cash all but swearing on his grandfather's grave that he wasn't giving up a 1st-round pick to sign Rafael Soriano.  Well "liar, liar, pants on fire" on Cash because last night the Yanks agreed to a 3-year, $35 million deal with Soriano to become the setup man to Mo in 2011.

I've spent the better part of this morning reading everybody else's take on the situation and when I weigh all the positives and negatives of this deal in my head, I have to say I dislike it more than I like it.

The benefits of this deal are pretty obvious.  Increased bullpen depth, proven commodity stepping into the 8th-inning role, and injury insurance for Mo should his body finally start to realize it's 41 and shouldn't be this awesome anymore.  In essence, this deal re-creates the situation that the Yankee bullpen had after acquiring Kerry Wood at the trade deadline in 2010, and gives Joe more options to mix and match with.  Furthermore, the increased depth will allow him to keep a better handle on workloads and use guys accordingly to cover the weak back end of the rotation right now.

But right there is where the negative aspects of this deal start.  Signing Soriano, a reliever, does nothing to address the most glaring issue the 2011 Yankees are facing, their weak rotation.  And signing Soriano for the kind of money they did gives the Yankees less financial flexibility to address that starting pitcher issue.  For a team that has been through the ringer on long-term, high-dollar contracts for setup men before with almost always exclusively negative results (see: Farnsworth, Kyle; Gordon, Tom), this is a curious move that screams panic to me.  For all the names that have been thrown out as possibilities for starters, the Yanks haven't expressed any serious interest in any of them.  The Soriano signing to me signifies them having no intention of signing any of these bargain-bin arms and instead focusing on strengthening the 'pen to be ready should Nova and Mitre falter as the 4th and 5th starters early in 2011.

And then there's the issue of the opt-out clauses.  The deal includes the option for Soriano to opt out after the 1st and 2nd years of the deal, which, any way you look at it, is a lose-lose for the Yankees.  If Soriano gets injured (and he has before) he gets to kick back and collect millions while the Yankees take the hit in the wallet and on the field.  If Soriano dominates, he can test the FA waters again and leave if a team presents him with a better or similar monetary deal to close.  I just don't see the reasoning behind making that kind of concession if you're the Yankees.  Why commit that much money and give away that much contractual control to a guy that you don't actually NEED?

Losing the draft pick isn't as a big a deal to me as it will be to others.  Yeah, this draft is supposedly stacked, but the reality is the MLB draft is a crapshoot, the Yankees already have a stocked Minor League system, and they have shown great ability over the last couple years to find solid talent in later rounds.  The real issue here is the money being committed to a non-essential piece who could leave after any year of the deal, and the fact that Cash going against what he said a week ago has to make everybody a little more wary of how much we can believe what he says.  Don't get me wrong, I think Soriano is a great pitcher and I'm glad to have him in pinstripes for 2011.  I just don't think the added benefit that he will provide will be worth all the costs associated with bringing him in.
Posted by Unknown at 9:37 AM 2 comments: