Shitty umpiring in MLB is nothing new, and there's been a string of horrid examples of that recently.  There's guys like Joe West and CB Bucknor who are still convinced they're the center of attention.  There's Mark Wegner blatantly ignoring baseball code and tossing pitchers for no reason. There's Tim Welke just straight not giving a damn if first basemen are actually on the base.  But the whole Laz Diaz-Russell Martin "throwing balls back to the pitcher" thing from last night might take the cake.

Martin wasn't happy with some of the ball and strike calls earlier in the game, and rather than be a professional and just take it, Diaz decided to assert some false authority over Martin as punishment for Martin daring to question his umpiring abilities.

"He told me I had to earn the privilege (to throw the ball back to the pitcher). Even at the end of the game after I get hit in the neck. I’m like, can I throw the ball back now? He’s still like no. I’m like you’re such a (expletive). Like for real. Unbelievable. I even told him like when there’s guys on base, I like to keep my arm loose. No. I’m not letting you throw a ball back. That’s pretty strange to me."

"He told me I have to earn the privilege. Now, thinking back, I should have shown him the gold Rawlings sign on my glove. Unbelievable.” (Martin after the game)

I know this is going to come as a complete shock, but the Yankees really haven't gotten much from the catcher position this season.  After breathing life back into his career last year, Russell Martin has regressed back to his 2009-2010 levels of offensive futility (.187/.333/.333, .309 wOBA, 90 wRC+).  And Chris Stewart, despite my best efforts to hype up his early production, has settled into the exact no-hit/all-field role we all anticipated him filling as CC Sabathia's personal catcher Martin's backup.  This adds up to a combined .196/.314/.313 tripleslash, .290 wOBA, and 77 wRC+ in 192 PA over the team's first 50 games from the catcher spot.  Production-wise, that wOBA ranks 19th in MLB, probably more of a testament to the overall offensive weakness of the position than anything else.  The Martin-Stewart tandem has been good for 0.8 WAR (T-16th in MLB), mainly on the strength of their positive defensive ratings, but with the up-and-down production of the lineup this season, some offensive improvement at the position would be helpful. 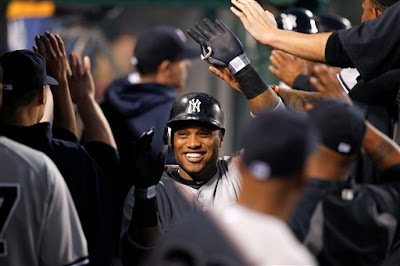 (Whaddaya know?  Another HR for this guy.  Courtesy of The AP)﻿

A couple of horrible innings from Phil Hughes and a couple of horrible pitches from Andy Pettitte ended the Yankees' winning streak and got them started on a new losing streak.  They were looking to get a rare win in Anaheim to avoid a sweep last night, and get things going back in the right direction before starting their trek back to the East Coast, but having Ivan Nova on the mound in that situation wasn't exactly the optimal option given his struggles this season.

- Nova didn't waste any time making a mess for himself in the bottom of the 1st, hitting, giving up a single to, and walking the first 3 Angel batters. In a pleasantly surprising turn of events, Nova managed to limit the damage to just a single run on a sac fly.

- After stranding a RISP in the 1st and guys on the corners in the 2nd, the Yankees finally struck gold against Ervin Santana in the 3rd.  Russell Martin led off with a walk (the one thing he has been doing at the plate), Jeter singled, and Curtis Granderson (who doubled in the 1st) hit a 3-2 fastball over the heart of the plate for a 3-run HR to right-center and the Yankees led 3-1.

- After a free pass to A-Rod, Robinson Cano stepped in and launched a 1-2 fastball on the inner half into the right field seats and just like that it was 5-1 Yanks.  Santana was missing badly with everything and didn't look much longer for the game.

- Escaping the 1st inning bases loaded situation seemed to settle Nova, as he worked through the next 2 innings quickly and efficiently.  He was locating his fastball down in the zone and getting groundball outs.

- But in the 4th, he hit a pretty big pothole.  Nova walked Kendrys Morales on 5 pitches to start the inning, then gave up Mark Trumbo's third HR of the series to make it 5-3.  A pair of singles and a 2-RBI double by Mike Trout later, and it was a tie game again.

- Ervin Santana was pretty awful against New York as usual, but give him credit for getting through the 5th and not allowing any more runs.  In fact, after the 3rd inning the Yankees only put 1 more runner on base for the remainder of the game.  That runner was Raul Ibanez, who tripled and scored on a sac fly by Swish in the 6th, so it was an important runner.

- Nova battled his way through 6.2 innings of work, fighting his fastball and curveball command the whole time, but he held the Angels at 5 before turning the game over to the bullpen.  Cory Wade got 4 big outs (3 of them via K), and Rafael Soriano picked up the save despite putting 2 more runners on base.