No stories or random thoughts today.  I'm just looking forward to being able to watch Yanks-Sawx on Sunday night.  Believe it or not, I actually didn't watch either of the ESPN games against the Rangers this week.  Well, I caught part of Wednesday night's game at a bar I was at with some people, but I missed every single scoring play so it's hard to say I really watched it.  Now onto the links!

- On Monday, Mike Jaggers-Radolf of TYA looked at the decrease in Derek Jeter's OBP this season and how it's tied to a change in approach at the plate as he's gotten older.

- On Tuesday, Josh Norris had some good quotes from a scout who gave his opinion on a few of the bigger-name A-ball prospects.  Surprising take on Tyler Austin.

- William Juliano of The Captain's Blog commented on The Captain's historically-good offensive season and the potential for it to hurt the 2014 payroll plans.

- SJK of NoMaas got the exclusive scoop on the infamous Adrian Gonzalez text that started the latest Fraud Sawx calamity.

- Chris Carelli of Yanks Go Yard looked towards September and the potentially deep bullpen that could exist when rosters expand.  I wouldn't count on much, if anything, from Feliciano, but hope springs eternal.

- Steven Goldman of Pinstripe Alley mused on A-Rod's contract and the absurdity of the idea that the Yankees should be surprised by A-Rod's decline.

- On Wednesday, Mike Axisa of RAB examined Curtis Granderson's continuing slump and the potential root causes for it.

- On Thursday, Brien Jackson of IIATMS weighed in on the Melky Cabrera suspension and commented on the flawed logic in suggesting that the MLBPA "has to do something" to address guys who get caught/punished.

- El duque of It Is High... said exactly what I was thinking in relation to the upcoming Yanks-Sawx series when he talked about the opportunity to end the Sawx's season in August this weekend.

- Bill Ballew of MLB.com had a nice little write-up on Dante Bichette, Jr., and took a much more positive tone with Bichette's tough first year in a full-season league.

- On Friday, Curtis Clark of Bronx Baseball Daily unveiled his latest AL East power rankings.  No surprise as to which team was at the top.

For the Friday jam I'm going back to the pick I originally had planned for last week before Deftones showed up on scene.  It's "Wires" by Red Fang and it's a completely kickass rock song.  It works for every situation.  You can rock out to it, hang out to it, cook out to it, chill out to it, smoke out to it.  It's a 5-tool rock song, the Matt Kemp of rock songs.  The video ain't bad either.

Enjoy your weekends, everybody.
Posted by Unknown at 2:30 PM 1 comment: 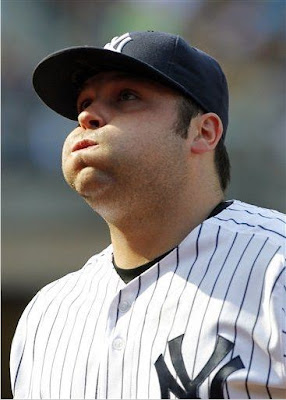 I appreciated Joba's openness and matter-of-fact assessment of his performance yesterday.  In the same vein as Eric Chavez's straightforward comments about the losing streak last week, Joba's real talk when discussing the job he did on the mound yesterday was refreshingly honest and the type of thing I would expect Joba to say.  He's a professional, he wants to do well, he wants to help the team win, and he's smart enough to recognize that he hasn't been doing that since coming back from his long injury layoff.  Joba has never been one to shy away from blame when he doesn't get the job done, and going just on the numbers so far it's pretty clear that he hasn't been getting the job done.  6 ER on 13 H and 4 BB in 6 IP is an ugly line for a reliever, and normally well within the parameters for determining a guy's worthiness of receiving some Bronx cheers.
Read more »
Posted by Unknown at 10:30 AM No comments: 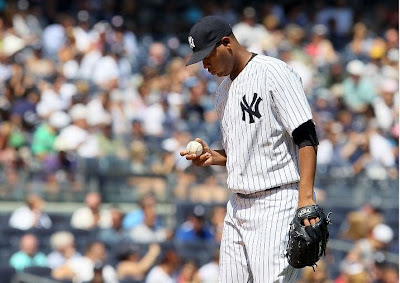 - The Yanks got 1 run in the 7th on a Mark Teixeira groundout, but that was as close as they would get again.  Just a tough day for the pitching staff all around.
Read more »
Posted by Unknown at 7:23 AM No comments: