What A Fucking Game!!! 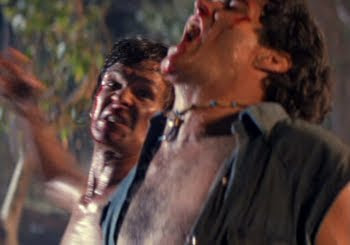 That image right there is what the Yankees just did to the Phillies with that win.  After being down 2 with 7 outs left to tying it in the bottom of the 8th, the Phils and their fans seemed to have momentum on their side. And then the human dam break that is Brad Lidge enters the game and opens the floodgates for the Yankees after looking almost competent against Matsui and Jeter.  If you didn't think the Yankees were scoring a run after the Damon double steal and Teix HBP then you're out of your mind, and if you didn't think Jorge was getting a hit after the A-Horse hit then somebody should be driving you to the mental health facility of your local hospital right now.

If the umps or Charlie Manuel had any sympathy, they would have stepped in and stopped the fight after the A-Rod double, at least leave a little bit in the Phillies' emotional tank for tomorrow night.  But after the deathblow by Jorge, there's no way they come back from that.  Once again, the Yankees recover from their mistakes and pick each other up, and once again Brad Lidge melts down, Chernobyl-style in a big moment, effectively ending his team's chances in this series.

Does it even make sense to call Lidge a closer anymore?  How does he deserve that title?  Don't be shocked if he shows up tomorrow morning dead in his hotel bathtub with his wrists slit.  In fact, that might be the only way to give his teammates a little lift going into Game 5.

Start spreading the motherfucking news because this shit is done like dinner. 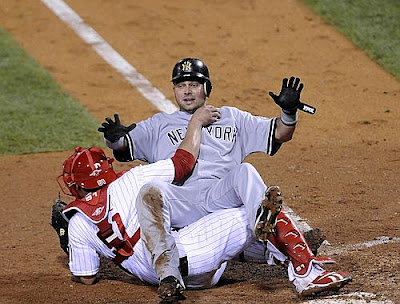 I can't speak much to the events of last night's game because after the 80-minute rain delay and the first 3 innings I decided it was more important to go drinking and check out some half-naked bitches, but I can tell you that everyone should be thanking me for doing so.

In the 3 innings I watched, the Yanks were down 3-0, Andy looked horrible, and the offense continued to be more lifeless than Ed McMahon. As soon as I left for the Halloween party Andy came back to life, A-Horse started knocking the ball out of the yard, and Nick Swisher re-introduced himself to the world of good hitting.

Sometimes you just have to know when to step aside and let things play out and that's what I did last night. I'm not even going to try to break the good vibes by breaking the game down. I'm just going to get ready for tonight and enjoy the music...

Posted by Unknown at 1:38 PM No comments: