The overall mood of Yankeeland right now seems to be one of unhappiness with the developments of the week and uncertainty with where the Yankees currently stand.  I got people texting me asking me what the deal with the Johnson trade is; I'm reading countless blog posts everywhere about how losing Matsui and Damon is a big deal and replacing them with Granderson and Johnson isn't enough, and so on and so forth.

Can everybody just calm the fuck down?!?!

How quickly everybody forgets last year.  The Yankees come out like gangbusters, scooped up CC and A.J. before any other team can even get them on the phone, practically robbed Andy Pettitte with the $5.5 mil deal to get him back and then everybody assumed they were done.  A few weeks later, Brian Cashman sneaks in the backdoor on everybody and snatches up Teix right from under Theo's nose.  Everybody thought the Yanks had spent what they were going to spend and assumed they were out of the Teix Sweepstakes only to have their apple bags punched into oblivion when Teix became the $180-Million-Man.

Fast forward to this year: Yanks make a good trade to add Granderson, upgrading their defense, athleticism, power, and youth in the process, then they let Matsui go because he was getting antsy and let Damon walk because he's drinking the Scott Boras Kool-Aid and thinks he's worth 13-mil at 3-4 years.  The more-than-reasonable Nick Johnson deal becomes official today and people are already condemning the Yankees to failure for these happenings???

It's December fucking 18th!!  Reeeeee-lax.  There is more at play here than the Yanks and Brian Cashman are letting on about.  Do you really think they would basically swap Damon for Nick Johnson if they didn't have some other things in the works?  Matt Holliday and Jason Bay are still out on the market (even though I don't want either of them), and I'm sure there's a couple of guys who the Yankees have discussed internally that we don't even know about.  So everybody take a deep breath, get a glass of egg nog, and calm down.

The fact is Matsui and his agent couldn't stand to wait a few days to let the discussions with Damon pan out and took less money than what the Yankees were planning to offer ($7.5 mil) to go to Anaheim.  Damon wouldn't budge from his stance on money and years and the Yankees moved on.  The way that those 2 handled their business says that they didn't truly want to be Yankees as much as they and their agents said they did, so good fucking riddance.

The Yankees can talk about wanting to spend less and setting a budget all they want, but you would have to be insane to think that spending $11.5 mil on Pettitte and $5.5 mil on Johnson is all they are going to do, especially with some of the big names still out there.  They played opposum on the competition last year and look how well that worked out.  Just let Cash work his magic; the dude has been on such a hot streak the last couple seasons that this is the wallet he's carrying around now: 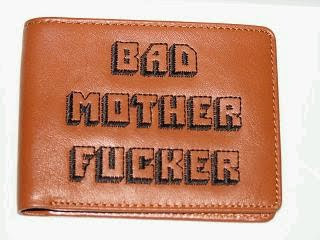 Before we all rush to judgement about how weak the lineup is now and how Nick Johnson sucks, let's just see what the next few weeks bring us, huh?

Posted by Unknown at 5:36 PM No comments: