Any Chance Of The Cardinals Being An Offseason Trade Partner?

Whatever combination of draft and/or development problems you think are responsible for the Yankees' present farm system situation, we can all agree that it's very far from where it needs to be.  In analyzing and discussing those problems over the last 2 days, the St. Louis Cardinals have come up often as an example of the type of farm system the Yankees should be striving to match and with good reason.  Picking lower in the 1st round than most teams and finding undervalued assets that they turn into productive Major League players, the Cardinals' blueprint for success is based in their strong draft and development strategies.

The Yankees obviously aren't going to turn their farm system around to that level of success overnight, but could there be an opportunity for them to poach some of the fruits of St. Louis' labor this offseason?  The Cardinals will at least test the trade market waters to address their biggest roster needs and they have plenty of young pitching to dangle, the type of young pitching the Yankee system has failed to generate.  Seriously, it's almost stupid how much pitching depth St. Louis will have next year when Jason Motte and Jaime Garcia come back from injury.  If they get serious about moving some of it, the Yankees should be all over that. 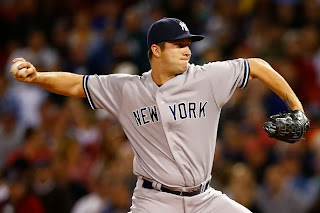 Adam Warren had himself a pretty good rookie season in 2013.  Just like his clone David Phelps in 2012, he gave the Yankees more than they were anticipating having to get from him, filled a variety of different roles when situations called for them, and had moments of success in each of those roles.  He'll be a more important piece of the pitching staff equation next year, but in what capacity?  Is he a viable starting candidate?  Is he best staying in the flexible long relief role?  Or could he become an effective 1-inning reliever?  Here's a quick statistical breakdown of how Warren fared in different situations this year:

Hard to draw anything conclusive from those sample sizes, but Warren did have most of his success pitching in longer appearances or shorter appearances.  That middle ground is where he really took a beating, although it's also where he racked up most of his strikeouts.  With Phelps and Pineda back in the mix next year, and presumably a free agent starter or 2 added as well, it will be interesting to see how the Yankees decide they can best utilize Warren.

Baseball America is moving forward with their offseason farm system rankings, and on Monday they released their organizational rankings based on high-level depth and the ability to provide Major League help in the next year or 2.  The Yankees came in 16th in this weighted ranking system, almost right smack dab in the middle of MLB.

This doesn't come as any kind of a shock based on where the Yankees came in on BA's level-by-level rankings and what we already know about the structure of their farm system.  They're light up top and heavy on low-level guys with high ceilings, so the chances of them churning out a lot of young talent in the next year or so are slim.  Personally, I'm a little surprised the Yankees even ranked as high as they did.  The only upper level player who could break in and make an impact next year is J.R. Murphy, and the futures of top guys like Sanchez, Williams, Austin, and Heathcott are up in the air based on their collective 2013 performance.

If nothing else, them falling in the middle of these rankings shows that there is value in the Yankees' depth.  Business as usual.
Posted by Unknown at 10:41 AM No comments: 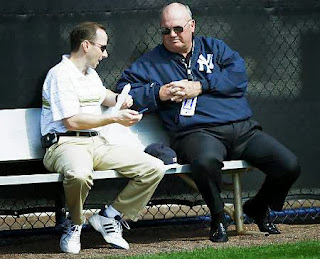 Yesterday when I raked Damon Oppenheimer over the coals and mocked the Yankees for allowing him to keep his job, the general consensus in the comment section was that the problem in the Yankee farm system was more development-based than draft-based.  There's a lot of truth to that statement, more than I might have realized at the time I was writing the Oppenheimer post, and Senior VP of Baseball Operations Mark Newman shoulders the bulk of that responsibility.  He's the one in charge of the team's developmental plan in the Minors and his recent track record is actually worse than Oppenheimer's.  Case in point, Baseball America's 2013 top 10 Yankee prospects and their career paths to date: