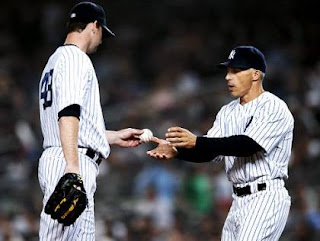 ("Just give me the ball and get the hell outta here.")
Just a little over a week has passed since I had my post praising Boone Logan and the job he had done recovering from his disastrous start to the season.  Since that post, here's the line Boone has put up over his last 6 appearances:

Ouch.  Not good, Boone.  Not good at all.  And in the last 2 appearances he's made, Logan hasn't retired a batter.  To make matters worse, he's reverted back to not being able to get lefties out, and that's a bit of a problem when the other lefty in the bullpen is Aaron Laffey.  So I'll step up and take the blame for jinxing him and killing his success.  Sorry guys.  Hopefully this new reverse jinx will help right the ship.

Boone, you suck!  You're a disgrace!  Get your shit together and start being more of a LOOGY, less of a LNOGY.
Posted by Unknown at 3:25 PM No comments:

(The kid looked good in the pinstripes.)
Yeah, me too.  I mean, damn!  I knew he was having a great year, but leading the NL in wins with 19?  I don't care what anybody wants to say about that stat being meaningless, that's still impressive when you consider some of the other dominant pitchers out there in that league.

It's impossible to say how Kennedy's progression since being traded to Arizon would have played out if he stayed a Yankee.  I'm sure the numbers above wouldn't be quite as good as they are pitching in the NL West if Ian had to face the Sawx and Rays and Jays all season, and he's still not much of a groundball pitcher (39.1%), which could be an issue in Yankee Stadium.  But there's no denying that Kennedy has become the type of pitcher the Yankees envisioned when they called him up, and having a guy like that would certainly be a huge benefit to a rotation mired in inconsistency, questions, and a constantly-changing idea of who the real #2 starter is.

I'm not trying to say that I wish the Yankees wouldn't have made that trade.  Curtis Granderson is an MVP candidate and I'm not missing Phil Coke or Austin Jackson at all.  But when you look at what's become of Joba, and you look at Phil Hughes' struggles this year, you have to think back and wonder what could have been with Kennedy if the Yankees would have shown a little more faith and patience in the kid.  It's a shame they didn't, but I'm glad to see somebody from the "Big 3" have some success.
Posted by Unknown at 12:48 PM No comments:

A Little Bit Of Nitpicking

I hate to be "that guy," but I've really got a problem with the way things were handled the past 2 games.  I get that the Yankees were and still are in a shitty position schedule-wise for the rest of the season.  I get that Buck Showalter is a dickbag and yesterday's game probably shouldn't have been played yesterday.  And I totally get that the Yankees are sitting pretty for a playoff spot right now and are thinking big picture as this last month of the regular season progresses.  But I DON'T think that those factors add up to it being OK to not play to win, and I feel like that's the message that Joe sent with the way he managed both Wednesday's game and yesterday's game.

And that's not to say that the players don't share some of the blame for the 2 losses.  They flat out didn't play well, in the field or at the plate.  Against a team like the Orioles the Yankees should do more than score 8 runs in 2 games, and the Yankees should especially do more than put up 0 runs against a bullpen the likes of that of the Orioles.  But when your manager enters a lineup card on Wednesday that has basically the entire starting lineup on the bench on a day where your team's worst pitcher is on the mound, that sets the tone for that game maybe not being that important.  And the players, being human beings, can pick up on that and play as if the game isn't that important.  And when you get into extra innings the next game, and your manager decides to stick with Scott Proctor for a 2nd inning of work after he had a less than smooth 1st inning of work, and sticks with him during that 2nd inning even when he's clearly worn out and giving the game away, well that just sends an even bigger message that that game isn't that important.

Again, I get that yesterday's game was a crappy situation for the Yankees because it was supposed to be a West Coast travel day.  But that still doesn't excuse playing like you've got one foot on the plane, and it doesn't excuse managing like you've got one foot on the plane.  Sitting pretty or not, the Yankees aren't officially in the playoffs yet, and the AL East isn't locked up.  The only thing that makes those 2 things happen is winning ballgames, and the Orioles are a team that should be very easy for the Yankees to beat to cut that magic number down when they want to.  And with the decisions that were made over the last 2 days, I don't think they wanted to.

Everyone needs rest, and everyone needs to be healthy, but the bottom line is winning.  Winning is the most important thing, and since I don't feel that Joe managed to win yesterday or Wednesday's game, I certainly hope the calls he made help the team be ready to come out and play winning ball in Anaheim.
Posted by Unknown at 7:58 AM No comments: