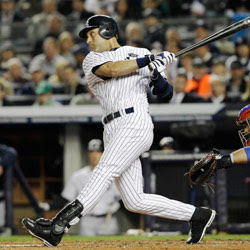 Things certainly moved quickly after Casey Close reached back out to the Yankees to get the talks going again earlier this week, and now it appears that Jeter is officially a Yankee again and they won't need to pick a new captain for 2011.

There aren't any definite words on the deal, as it is still pending the passing of a physical, but word is the offer is a 3-year/$51 million one for $17 mil per season, with an option for a 4th year that could be worth another $ 10 mil.

All in all, that's not a bad deal at all and has to be considered a win for the Yankees, who end up with the final dollar value being much closer to what they wanted to pay and also didn't get locked into a 4th, 5th, or 6th year.  Jeter and Close look a little dumber for their comments in the media and their out-of-this-world desires, but at the end of the day they both recognized that this deal was more than fair and far better than anything they would have been offered by any of the other 29 teams in baseball.

Mo's back.  Derek is back.  Now the Yanks can focus all their winter meeting on Cliff Lee.
Posted by Unknown at 4:31 PM No comments: