It's Almost That Time...

Ahh yes, time to break out the music as we draw ever so close to Opening Night.  And nothing says spring time like a little Y-A-N-K-E-E-S.  Over the wall indeed.

Seriously though, can somebody put together an up-to-date picture montage for this song?  Why the hell am I still looking at Jason Giambi and Chien-Ming Wang??


P.S.- Did anybody catch AFB and Nomar on SportsCenter tonight?  Boonie picked the Yankees to make the World Series (and lose, WTF?), and Nomar picks the Red Sox.  Way to go out on a limb and be objective, fellas.  Why don't you just wear your team hats and old jerseys the next time you're on the air?
Posted by Unknown at 6:30 PM No comments: 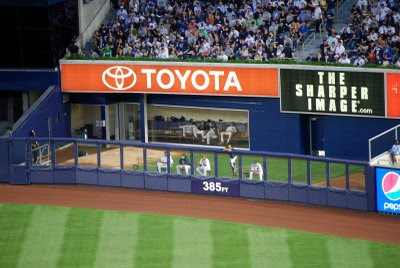 In 2009 the Yankee bullpen was like the awkward, late-bloomer chick who flies under the radar in the looks and personality department all through high school only to go to college, grow into herself, and show up at the 5-year reunion an absolute dick wrecker. Jose Veras, Brian Bruney, and Edwar Ramirez were the bad skin, split ends, and ill-fitting clothes of the bullpen that started the year and Phil Hughes, Dave Robertson, and Damaso Marte were the makeover the team needed for the 5-year reunion.

In 2010 things are expected to be far different, as the Yankees have strengthened their bullpen that finished last season both internally and through a shrewd last-minute free agent signing. With the depth and stuff out there beyond the right field fence, the Yankees are coming into this season with the bullpen not only not being a question mark for the first time in a long time, but with it actually being considered a strength for the team.

As always, the 'pen starts off with the man, the myth, the legend, Mariano Rivera. Mo's numbers were other worldly last season when he was coming off of shoulder surgery and even though he's 40 I expect those numbers to be just as good, if not better, this season. It has been documented that Mo's velocity was down and his contact rates were up last year, both more than likely attributed to his shoulder not being at full strength due to surgery. Now that he's had time to fully recover from that, it would be logical to expect those numbers to at least hold the same rather than drop off this season, even if he is an old man. Mo is playing for a new contract and it will be interesting to see how many years the Yanks feel comfortable giving him based on this year's performance. But for the immediate future, we can all sit back, relax, and enjoy watching the best in the business continue to be just that.

The setup man position has been a revolving door since Mo took over as the full-time closer. Last year it was solidified in June with the arrival of Phil Hughes to the 'pen, but with him in the rotation this year it is once again an open competition. However, unlike years past, this year presents a crop of good, viable options to bridge the gap to Mo in the 9th. The first would be Joba Chamberlain, and although it has been confirmed that he is not guaranteed the 8th-inning spot, his track record in that role shows that he is the ideal candidate. His fastball and slider should both see their zip increase as he gets re-acquainted with the reliever's position and his adrenaline and emotion are well-suited to be a one or two-inning shutdown guy. The other guy from that same mold who could step into the setup role is Dave Robertson. Like Joba, he is a two-pitch reliever (fastball, curveball), and while he doesn't pitch with the open emotion that Joba does, his stuff is just as devastating and perfectly-tailored to be a late-game stopper.

Along with these 2 holdovers are 2 others who could see major time in late-game, shutdown situations. The first is Damaso Marte, who missed almost all of last season before coming back at the end of the regular season and then shining as arguably the Yankees' best reliever in the postseason. As the only lefty in the 'pen to start the year, Joe envisions Marte as more of a situational lefty-lefty matchup guy, but if there were a situation where multiple lefties were scheduled to bat in the 8th, Joe could very well use Marte over his other guys. Chan Ho Park is the only "new" member to the 'pen, but after pitching well against the Yankees in the World Series for Philly last year and looking fantastic in Spring Training, he has certainly shown that he could be capable of handling an 8th-inning role. As a former starter, there are lots of options with Park: one batter, one inning, two innings, etc. The most important thing about having all these options at his disposal is that it allows Joe the luxury of not over-working anybody, something he did a good job of managing last year, while still having the ability to play matchups or ride the hot hand.

The long man role is also well covered this year with the tag team of Alfredo Aceves and Sergio Mitre. They are both already stretched out from their participation in the 5th Starter Sweepstakes and can be counted on for 2+ innings in situations that call for it. Aceves is another Swiss Army knife-type pitcher who can give Joe anything from a batter or 2 to 3-4 innings. He is already experiencing some lingering back issues from last season, but with the proper rest and monitoring of his status it shouldn't be a huge deal. Mitre, despite not having the relief pedigree, has looked great in Spring Training, showcasing much better command of all his pitches and better zip and accuracy on his fastball, and appears fully recovered from Tommy John surgery. He will most likely be the first choice to provide spot starts if and when they are needed, but with his stuff he can also be a vital addition to the bullpen.

The cherry on top of this bullpen-depth-and-talent sundae may be what's waiting in the wings. If injuries or fatigue start to creep in, the Yankees are well stocked in the Minors to fill in. Mark Melancon has been groomed over the last couple years to be a Joba or Mariano-type stopper, and his two-pitch power will make him the first candidate to be called up. Boone Logan, a throw-in in the Javy Vazquez trade, and Royce Ring both performed well in the spring and would be solid options as either second lefties or replacements for Marte. And if worst came to worst, the Yankees could always go back to Jonathan Albaladejo, especially if they are looking for someone to raise the bullpen ERA and WHIP up a little bit.

The long and short of it (see what I did there?) is that the Yankees come into 2010 with a bullpen as stacked as it has been since the late 90s. On paper they have every conceivable situation covered from every conceivable angle and have enough talent and depth to confidently cover games once the starter is removed without worrying about overworking any one or two guys. Of course injuries will always cause changes to the plan, but the Yankees also have the depth to cover that as well. All in all, the bullpen should be considered a strength for the Yankees this year, and will be something that all teams have to prepare for when it comes to the Yankees shortening the game.
Posted by Unknown at 10:36 AM No comments: