- Joe has announced Joba as the officially official 8th-inning setup man for Mo.  Given the way he's looked the last couple times out combined with Dave Robertson's inconsistency and Chan Ho Park's injury, you can't even try to argue with that decision.

- Phil Hughes makes his 2nd start tonight.  How will he look on what should be a regular rest pattern but could seem a bit short considering he was skipped the first time through the rotation?  We'll find out in a few hours.  Seeing as how he's facing a lineup that features Kevin Kouzmanoff as its cleanup hitter, Hughes should fare well if his stuff is working like it was the first time out.

- What Ben Sheets will the Yankee lineup see tonight?  The guy who couldn't get one fucking out in a Spring Training start or the guy who's 1-0 with a 2.65 ERA so far and threw 6 shutout innings his last time on the hill?

- Swish out and Randy Winn in for a start in right tonight.  I'm a little surprised by this move since Swish finally got off the schnide last night with a hit and a couple RBIs.  Is Swish hurt or sick?  If not, why is he getting a day off?  Call me crazy but I like Randy Winn right where he is as the 8th or 9th-inning defensive replacement.  I want Swish's bat (and patience) in the lineup against a good starting pitcher 25 hours a day, 8 days a week.
Posted by Unknown at 7:32 PM No comments:

One Under The Belt For Vazquez

Well it wasn't an award-winning performance last night by Javy (5 1/3IP, 6H, 3BB, 3ER, 6K), but it was still improvement upon his first 2 outings, and it ended in another W for the Yanks, so that has to take a little bit of the weight off his shoulders and it should give him a little more lead on his leash with Yankee fans as he continues to try to solve his mechanical issues and build up his velocity. 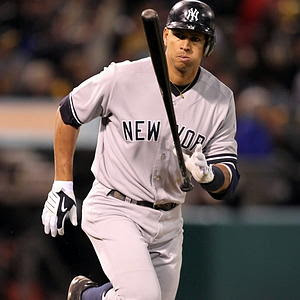 (Photo courtesy of Reuters)
Of course, when the A-Horse is seeing the ball and mashing like he was last night, a pedestrian outing like the one Vazquez had yesterday will usually be enough to get a win.

Don't look now, but The Horse is now hitting above .300 and is tied with Bobby Cano for the team lead in RBIs with 10.
Posted by Unknown at 9:21 AM No comments: