As The Joba Turns... 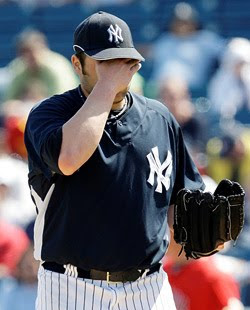 Does anybody know what to do with Joba? According to Mark Hale's article in today's Post, apparently not.

- On Saturday, Yankee senior director of pro personnel Billy Eppler... said on WFAN that he doubted Chamberlain... would even be in the rotation derby next season.

- Also, pitching coach Dave Eiland told the Star-Ledger of Newark yesterday that, in his mind, Chamberlain would not pitch in the rotation at all this season and that going forward "he's in the bullpen and he's there to stay, period."

- Cashman, though, insisted the Yankees had not come to any decision yet about Chamberlain's 2011 role.
"We haven't had any team meeting and said, 'All right, he's a reliever for the rest of his life,' " Cashman said. "No, we didn't do that. That's never been discussed."

- Eppler did say on the radio that, "If we were in a different setting, a different situation, you might see Joba Chamberlain in a rotation."

- ... if one of the current Yankees relievers were needed to make a start at the beginning of the year, manager Joe Girardi said it's more likely to be Alfredo Aceves or Sergio Mitre than Chamberlain.

- "It sounds like the Joba starter-relief thing will be forever," he [Cashman] said. "How about we just add the little word to the shirt and have a new shirt -- Joba Rules Forever. Leave it like that."

At this point, the best thing to do with Joba might be to have him cryogenically frozen and stuck in some sub-zero temperature vault next to Ted Williams' head in Arizona until the Yankees can come to a conclusion as to what exactly he is and what exactly they plan on using him for moving forward. They've already fucked him up bad enough in the last 3 years and there's no sense in risking setting him back any further until everybody can come to a decision on what role he is going to be used in and then stick with that decision.
Posted by Unknown at 10:52 AM No comments: