Another week has come and gone, Yankee fans, and this one really wasn't much different than the last one.  The rotation is still in a state of inconsistent disarray, the lineup hits like gangbusters when it wants to and then goes to sleep at inopportune moments of close games, and the bullpen is straight shutting shit down.  When all that is happening and the Yanks are still only 1 game back of the division lead, I'm a happy camper.  This team hasn't even begun to hit its stride yet and its still one of the best in baseball.  They get the chance to get a little momentum going this weekend back at home against the Tigers, a team they'll likely see in the postseason if/when they make it.  Onto the links!

- On Monday, Lisa Swan of Subway Squawkers weighed in on the latest Michael Pineda developments and the Yankees' position on handling him since the trade.  I can't imagine she felt any better after the labral tear was announced.

- On Tuesday, Andrew Corselli of Yanks Go Yard got his praise in for Derek Jeter's phenomenal start to the season, and also took the time to point out Jeter's low BB rate, which could be a good or bad thing for him moving forward.

- Travis G of Pinstripe Alley took an interesting approach to analyzing Mark Teixeira when he compared Teix's first 3 seasons as a Yankee to Jason Giambi's, the previous big-money first baseman.

- On Wednesday, Josh Norris of Minor Matters posted the first part of his interview with Rick Down, the Yankees' hitting coordinator.  I particularly enjoyed Down's "hitting is like handwriting" theory.

- On Thursday, Eric Schultz of TYA put together an excellent piece examining the history of labrum tears in pitchers and how it all adds up to predicting Pineda's recovery path.  Not sure if that post made me feel better or worse about the injury, but it's very informative and worth a read.

- Mike Axisa of RAB shined the spotlight on the 3-4 spots in the Yankee lineup and how weak they've been thus far this season.  While it's certainly worth pointing out how well the offense has done as a whole without production from those spots, it's also fair to say, "hey, Robbie?  Alex?  You guys wanna wake up now?"

- Donnie Collins of the SWB Blog had some details on the sale of the SWB Yankees.

- Fishjam25 of Yankees Fans Unite proposed an interesting scenario when he suggested the Yankees convert Dave Robertson to a starting pitcher.  I understand his logic, but D-Rob never being a starter at any time in his pro career is a big red flag for me.

- Brien Jackson of IIATMS had a much better worded and well thought out reaction than mine as he searched for somebody to hold accountable for the Pineda injury.

- Normally I would never link to him, but Andrew Marchand of ESPN actually did a solid job with this piece, in which Curt Schilling describes his return from a torn labrum and the optimism he has that Pineda can make a full recovery.

- On Friday, el duque of It Is High... spoke on the possibility of John and Suze being gone again after this season if the Yankees get moved to FM radio.

It's been a little rock heavy in the Friday Jam world recently, so I'm changing that up today and going with a little Pusha T/Tyler, the Creator collabo.  I don't care who you are, where you're from, and whether or not you even like rap music.  If this beat doesn't at least make you head bob a little bit, you have problems.  If I was a professional baseball player, this would absolutely be my "walking to the plate before an AB" music. 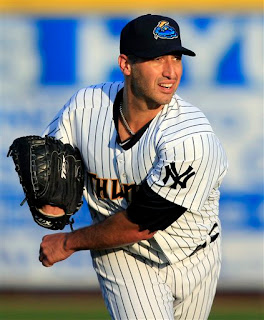 If Hughes and Garcia continue to struggle, Andy is going to be looked at to provide length and quality innings to solidify the back end of the rotation.  And while that certainly won't fluster a professional of his caliber with his track record, it's probably not what most of us were expecting to say about his return.  Andy was the de facto stopper for the rotation late in the 2009 season and through the World Series run.  He might have to take on a similar role with the 2012 rotation in May.
Posted by Unknown at 7:45 AM No comments: