Did Cash Tip His Hand On The Robbie Cano Contract Yesterday? 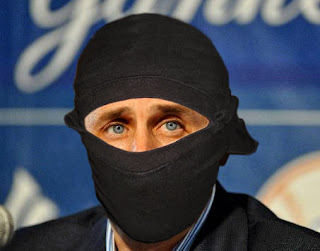 (Was that a sneaky Ninja Cash slip of the tongue I detected?)

I already covered yesterday's Brian Cashman presser from 30,000 feet today, and while there was the one quote that stood out head and shoulders above the rest, there was one more that blipped onto my radar too.  When talking about the desire to have Robinson Cano back and where the contract talks between the 2 sides stood, Cash let slip (or did he?) this little clue as to what the Yankees might be planning:

“We’d love to have Robbie back….  He has received - or will receive -a significant offer to stay."

We know the Yankees made Cano an offer of 7 years and $161 million ($23 mil AAV) sometime this season, and no one would argue that's not a significant offer.  But Cash adding the line about "will receive" may be a clue as to where the Yankees currently stand in the process.  Anticipating that Cano wasn't going to accept their offer, maybe they already have their next counteroffer in mind.  Maybe there's something already in the works as a second offer.  Maybe the Yankees already have their entire negotiation strategy planned out to try to lock in a new deal quickly.  I would support that strategy wholeheartedly as it would allow them the rest of the offseason to fill all their other roster holes.  Guess we'll have to see how the next few rounds of negotiations play out to know for sure.
Posted by Unknown at 3:30 PM No comments:

While it's still a month away, eventually the offseason will start and the Yankees will be face-to-face with a buttload of decisions to make for 2014.  They're losing a lot of players to retirement and free agency, and with the payroll budget and A-Rod's suspension uncertainty hanging over them it could be quite the uphill battle to replace, rebuild, restock, and re-up for next season.  One of the first round of decisions they'll have to make is whether to extend qualifying offers to some of their own free agents.  With the QO value expected to be around $14 million, that's a significant chunk of change to tack onto the payroll for a team on a budget.  The Yankees are going to have to weigh the value of that salary and anticipated production against the possible draft pick.

Now we're not talking about every free agent here.  Obviously the Yankees aren't going to make offers to Mo or Andy because they know they're retiring.  I'm also pretty sure they won't be making offers to guys like Kevin Youkilis and Boone Logan because they're nowhere near being worth that kind of money.  There are 4 players who stand out as potential candidates.  After the jump, my decisions on whether to make each of those 4 a qualifying offer.

It's not nearly as flashy as the 6 players they put on the GCL Top 20 list, but the Yankees did sneak 1 of their own onto Baseball America's Top 20 NY Penn League Prospects list that was released yesterday.  To no one's surprise, that player was 2013 1st round draft pick Eric Jagielo, who BA ranked as the 6th best prospect in the league.

After a slow start to his pro career, Jagielo really picked it up late in the season and finished with a .266/.376/.451 batting line (.390 wOBA, 153 wRC+), 6 HR, 27 RBI, and an 11.9% BB rate in 218 PA.  The BA scouting report commented positively on Jagielo's "smooth" swing and polished approach, typical for a college hitter in a short-season league, and said he should be able to stick at third base long term.  There weren't many other worthy Top 20 candidates on the SS Staten Island roster, but Jagielo's ceiling makes the lack of other representation less of an issue.

Jagielo should get his first taste of full-season ball next year and the Yankees really need him to produce and advance quickly.  Their continued lack of 1st round pick results has become a huge problem. 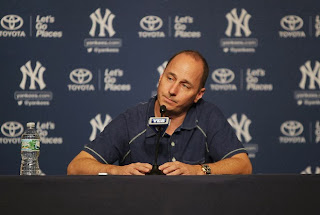 (Courtesy of The Star-Ledger)

Brian Cashman held court with the Yankee beat writer corps yesterday for his yearly season-ending press conference.  Typically there's little that's discussed here that constitutes actual news.  Maybe an extra injury we didn't know about here, an announcement about coaches coming back there, nothing earth-shattering.  It's more Cash's one time to give his thoughts on the season as a whole, talk more about individual players than he might have while the season was going on, and set the stage for the upcoming offseason.  It was all of that business as usual yesterday, with a few potential nuggets of interest here and there.  It's not hard to find more detailed descriptions of what Cash said around the blogopshere, but if you're just looking for the tastiest morsels, here they are.