A Day Of Reckoning May Be Coming

Who dareth speak foul of The Almighty?

First be the sinner Jayson Stark, he of ESPN:

"It isn't every year that the International League has two catching prospects as hyped as Jesus Montero (Yankees) and Carlos Santana (Indians). But a scout covering that league says there's "no comparison" between those two....

Montero... "just got benched for laziness, basically [i.e., not running out a ground ball]. And from what I've seen, the [Austin] Romine kid in Double-A is going to pass right by him, and Montero is going to end up as pretty much a right-hand-hitting DH. He's got talent. But his swing is really long, and he has no discipline. So the Yankees are going to have two frontline catchers. But they're Romine and [Francisco] Cervelli."

And second to preach at the altar of Satan be Joel Sherman, a Yankee wolf in sheep's clothing:


"The true sin is that he was removed from a recent game and benched for not hustling and sulking. This came at a time when the Yankees had a couple of injuries that have begun to negatively impact their offense, including to DH Nick Johnson. Would the Yanks have summoned Montero if he were hitting well? Possibly not. They were determined in spring to get him 100 games as a catcher this year in the minors....
However, the Yanks are not going to call up a young player acting like a baby, and so Montero might have hurt himself now and into the near future.
In spring training, I sat in an office at the Yankees’ minor league complex and spoke with Montero. During that interview, Montero told me that Jorge Posada is “my daddy.’ That was his way of saying that while he was in major league spring training he followed Posada around like a puppy dog and hoped to emulate him.

If that were the case, then he learned very little. You could criticize Posada for being a bad baserunner or a stone-handed catcher. But his sincerity of effort has never been in question for one second of his Yankee career. Posada cares about being a professional and being a Yankee, and so he plays with passion.

And if Montero needs to see how far fervor can go then just look at what Francisco Cervelli is doing with the Yankees. He is creating a career with expected defense, unexpected offense and boundless enthusiasm. Cervelli is honoring the legacy of Posada. Not Montero."

Nay, Joel.  The true sin beeth thou daring to talk ill of such a great and mighty Lord of the Pinstripes.  Consider thyself lucky if thou dost not take ill or feel the icy hand of death upon thyself tonight in one's bed.  The Almighty needeth not run out every play at first base.  And dare risk possible injury to the legs that will surely carry the future middle of the Yankee order??  How dare thy even suggesteth such a thing!  The Almighty will be the ventricles of the heart of the lineup; the very lungs that shall breathe life into the team of the future.  And he will runneth as hard as he damn well please.  If thou don't like it, thou can sucketh upon a dick.

Seriously, though.  Who cares about this?  Kid is fucking 20 years old and experiencing his first tough times as a professional baseball player, maybe even as a baseball player period.  Leave him alone and let him learn from his mistakes.

Nobody fucks with the Jesus!! 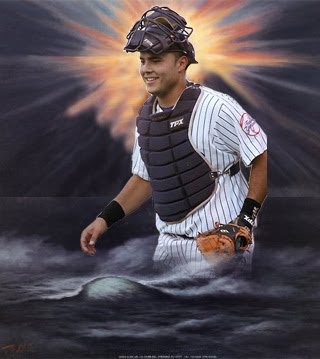 Posted by Unknown at 9:45 PM No comments:

The Green, Green Grass Of Home

In honor of the Yanks returning to The Stadium tonight after what seems like another 45-game road trip, here's a quick batch of "home"-themed YouTube selections to set the mood.

And of course, it wouldn't be complete without a little Frankie...

Ahh, doesn't that feel better? Now let's hope we all get Good A.J. tonight and not bad A.J.
Posted by Unknown at 1:42 PM No comments: