Well, a 6-inning shutout anyway.  But that's a pretty damn good result for a guy who was maybe on his way out of the rotation if he bombed tonight.

In all seriousness, Hughes was damn good tonight.  He only needed 65 pitches to navigate through his 6 rain-shortened innings of work and was very effective.  He threw a lot of strikes (48 out of 65), got ahead in the count (15 out of 20 batters faced got 1st-pitch strikes), and he even got 7 swings and misses.  His stuff was better, his command was better, he was better.  For one night, at least, Phil made the Yanks look smart for not making moves at the deadline and holding onto their solid 6-man rotation. 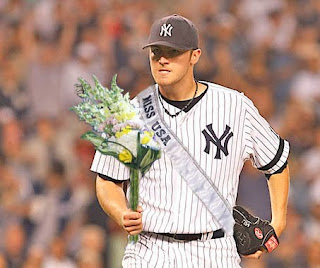 (He's back!  At least for one night.  Fuck it, I just wanted to use this Photoshop again.)
Posted by Unknown at 11:09 PM No comments: 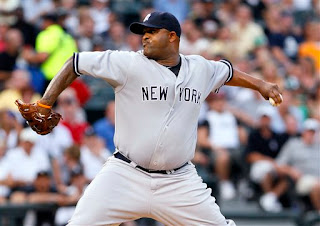 (T-H-E  M-A-N.  Courtesy of The AP)
Last night was a case of true good pitching versus theoretical good pitching.  For the Yankees, CC was not nearly as dominant as his previous start against the Mariners, despite his final line appearing quite good:

The 10 hits allowed were a season high, and even though he got 13 swinging strikes it was clear to anybody who watched that CC didn't have his best stuff.  His slider was a bit more floaty than it has been in the past month and he got in trouble a few times with it.  But at the end of the day, he still managed to limit the White Sox to just 2 runs and hold them there after his offense stopped producing.

On the other side, John Lackey turned in yet another outing that has become the norm for him this year:

And he did this while actually looking like he was pitching pretty well (yes, I actually watched a Fraud Sawx game.  It was on ESPN in the background at my apartment while I was packing for vacation).  His stuff actually looked better than it has for most of this year, and early on Lackey was cruising, only to fall apart in the middle innings.  He couldn't locate when he had to, couldn't limit the damage, and didn't put his team in a position to win the game.

And that's the line that separates the real good pitchers from everybody else.  CC came out without his best stuff and best location and still got the job done when his team needed him to.  Lackey came out with what looked like very good stuff and very good command and collapsed.
Posted by Unknown at 7:33 AM No comments: