It wasn't a move to re-acquire Jesus Montero as some people have suggested, and it wasn't the dream trade for Felix Hernandez that many still desire, but the Yankees and Mariners hooked up again today in a minor deal.  The Yankees acquired right-handed reliever Shawn Kelley from Seattle for MiL outfielder Abraham Almonte.

Kelley is 28 years old, has good size at 6'2"/220, and is actually a pretty decent relief pitcher.  In 44.1 IP last season over 47 appearances, Kelley pitched to a 3.25/3.55/4.20 tripleslash with a 9.14 K/9.  He's almost exclusively a fastball-slider pitcher, and can dial the heater up to mid-90s when he needs to.  Kelley spent small parts of the last 4 seasons in the Seattle 'pen, but could never break into a regular role.  He likely won't do that with the Yankees either, but he'll be right there with Cody Eppley as an early call-up candidate if he sticks.

Almonte was a fringe prospect at best in the Yankee system, and removing him from the outfield equation helps clear up a bit of the overcrowding problem that was creeping up in the Minors.  He didn't have much of a future as a Yankee, and may not have a much better chance of upward mobility in Seattle with all the OFers they've added.

Not a bad move for the Yankees, but if Seattle is interested in dealing it would have been better to try to make a run at Casper Wells.

** UPDATE 7:32AM- Neglected to mention this last night, but another added benefit of trading for Kelley is the years of team control remaining.  Kelley is a Super Two player and has 3 years of arbitration eligibility remaining.  If they want, the Yankees can keep him through 2015 before he hits free agency. **
Posted by Unknown at 6:40 PM No comments:

With the 2012-2013 offseason now squarely in the rearview, the Yankosphere is collectively getting its last licks in this week and putting the finishing written touches on what was universally regarded as a boring, unproductive, "bad" offseason.  There are a million ways to paint that picture, the best of which involve statistical analysis and comparison, and some of which have been done in bits and pieces on this blog as part of other posts.  But with so much still to happen that will ultimately determine just how successful or unsuccessful this past offseason truly was, it's almost more hassle than it's worth to try to dig through the numbers and analyze the projections.  Here's all anyone really needs to know about this offseason: 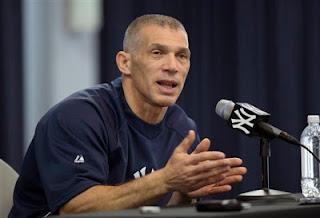