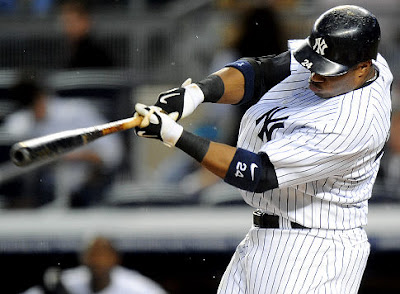 (Photo used courtesy of The NY Daily News)
Another story that I passed over from earlier this week was the Robinson Cano Home Run Derby fiasco.  Cano was announced as a participant early in the week and almost immediately there were stories and quotes floating around from within the organization voicing concern about his participation.  And sure enough, by Thursday it was announced that he would not be participating due to injury.  I don't know about you guys, but I could smell the bullshit coming from that announcement a mile away when Kevin Long started spouting offon Thursday about Cano's swing being affected or not affected or him becoming fatigued or not fatigued as a result.  Example:

“I would prefer that he’s not involved in it, but that’s not my decision.… It’s just an exhausting process. It takes a lot out of you. It’s taxing. You see guys come back after the home run contest and it affects their swing.”

“It’s not so much altering a swing. You know he’s going to try to pull the ball quite a bit. I don’t think it’s going to affect his swing more than it’s just going to take a toll on his body."

Well which one is it, Kev?  The swing or the toll on the body?  You can't say you've seen guys have their swing messed up and then say you don't think that would happen to Cano.  At least Joe was consistent in his statements to the media, citing concern over fatigue as his reasoning for not wanting Cano to participate, which is all well and good.  It's his team and he can make the calls.  Only problem was, nobody told Robbie he wasn't going to participate any more.  Here was Cano on Thursday:

“As far as I know, I’m doing it.  I saw it on the computer that I’m not doing the derby, but nobody has talked to me… They should have let me know something and tell me about what was going on.”

When he was told by the media of the reasoning behind the Yankees not wanting him to hit, his reaction couldn't have been any more correct.

“Why not?  First time in your career. Go out there and have fun. Why not? That’s the kind of thing that might happen once in your life. We take BP every day, and it’s not going to be a big deal.”

Now here's my 2 cents.  I agree completely with Robbie on this one.  He's enjoying the finest season of his career this year and has finally started getting the recognition from everybody in the media and the baseball fanbase as one of the best all-around players in the game.  It's his first chance on a big stage to be seen by a wider audience than just the Yankee fans who watch YES religiously, so why shouldn't he go out there and have fun and have a chance to put on a show for the fans who are finally starting to take notice of him?

As far as using the fatigue and wear and tear on the body argument, that's just nonsense.  Like he said, every player takes batting practice every day and that's essentially what the Home Run Derby is.  It's not like he has to go out and run the bases on every ball he hits and slide into second and third if he hits a liner into the gap.  He has to stand there and take easy swings at meatball pitches in the 70s amd 80s and let as many balls go by as he wants.

And therein lies the other argument against Long's statements.  Robbie Cano's swing is one of the smoothest and prettiest swings in baseball.  There is very little effort and very little wasted motion in his swing so the chances of him getting tired from taking many swings in a Home Run Derby are slim to none.  And even when he does hit home runs, there isn't much more force put into that swing than there is when he doubles the other way into the gap or grounds out to first.  So not only should there be no worry about fatigue, there also shouldn't be any worry about Cano's swing being messed up because it's so damn consistent.

Now we know that Nick Swisher is going to participate tomorrow night and there hasn't been any negative feedback on that.  So why for Cano?  If it were me, I would be more concerned about Swish fucking his swing up or tweaking something because he has a much more forceful, violent swing than Cano, but nobody has said boo about Swish participating.  Was it because the team put so much into getting him into the game that now they feel like they owe it to him to let him hit?  If that's the case, then why couldn't Cano participate?  Up until a few days ago he was the team leader in home runs and it would have been interesting to see what he could do in the Derby.

The Yankee family lost one of it own today, one of its longest-standing members.

Bob Sheppard and his "voice of God" were just as synonomous with the New York Yankees as the pinstripes, the interlocking "NY" logo, The Stadium, Monument Park, and anything else you could possibly think of.  I still remember hearing his voice announcing the Yankee batters the first time I ever went to a Yankee game.  No public address announcer anywhere in any sport will ever have a voice and a delivery quite like Bob Sheppard.

Rest in peace, Bob.  You will be missed. 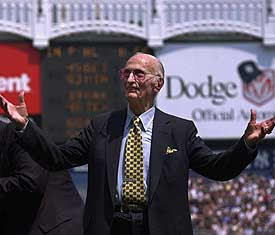