Both Phil Hughes and Colby Lewis are coming into this game off of great outings in the ALDS.  Each guy allowed 0 runs, and while Lewis was solid in 5 innings, Hughes was a stone cold killer through 7 in a series-clinching game and got his team the win while Lewis watched the bullpen cough up what would have been a W for him as well.  Something has to give for these 2 today, and it will be worth noting how the first guy to give up a run reacts.  People will point out that Hughes has never given up a run in 15.1 IP against Texas, but that should have no bearing on his performance tonight.  What he needs to do is keep attacking hitters like he did against Minnesota, but be more conscious of mixing up his pitches because the Rangers are a much better hitting team than the Twins.

2) The Yankees' Approach Against Lewis

Only 4 Yankees have hit against Lewis in their careers, and they have shown over the year that they can look completely lost against pitchers they haven't seen before.  And Lewis is no slouch, he was top 10 in the AL in strikeouts and WHIP so he has swing-and-miss stuff, which makes it more difficult for hitters if they fall behind early.  But like every other Ranger starter not named Cliff Lee, Lewis does have the tendency every now and then to either lose the zone (as evidenced by his 5 BB in 5 IP against Tampa) or lose his command within the zone and get hit hard.  I would imagine the Yankees will stick with what they've done all along so far this postseason and be patient early.  But if Lewis is pounding the strikezone with fastballs, expect the Yankees to start swinging earlier and jump in him the 2nd time through the lineup.

Ron Washington certainly has had his troubles in the 'pen so far this postseason, having a quick trigger finger when it comes to going to it even when his starters are throwing well (see: Lewis' start in the ALDS).  Yanking Lewis after 5 innings and only 85 pitches proved to be the wrong move in that game, but last night Washington fell victim to the other side of that decision, leaving C.J. Wilson in for a bit too long and then running through a marathon of ineffective middle relievers without ever considering going to his All-Star closer to stop the bleeding.  So how will he approach today?  Will he give Lewis some more lead on his line after a solid ALDS start and a bullpen meltdown last night?  And if it calls for it, will he go to Neftali Feliz for more than 3 outs?  Another fuckup by Washington when it comes to late-game bullpen management, and his team could be looking at a 2-0 deficit as they head to the Big Apple.

I have no statistical basis for this, I just have a gut feeling that The Horse is due for a big game.  He has had some big hits so far, but not a complete game where he just takes over like he did last year.  Even on the outs he's made, he's made solid contact, he just seems to be a little swing happy at the plate and might be reaching just a little bit.  After his first-pitching swinging 2-RBI single in the 8th last night, he was up there hacking again on the first pitch with Jeter on 2nd in the 9th when he probably should have been taking until he got a strike.  If he can stay patient early in the count and get himself a favorable hitter's count or 2 tonight, watch the fuck out because there might be some souveneirs coming.


Well last night was a hell of a way to kick off the series and today the Yankees have a chance to take command of the series before heading home.  The earlier start time ahead of the dynamite Halladay-Lincecum matchup that, quite frankly, deserves a primtime slot means that the shadows will come into play today.  We saw the "strobing" effect the light-to-dark-to-light shadow pattern had on hitters in the Rangers-Rays series so that could be a benefit for the pitchers.  Which lineup can handle the shadows better?  We'll find out in a couple hours. 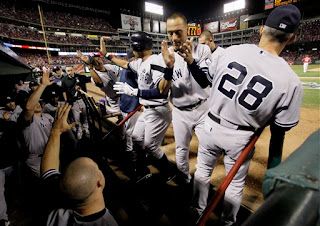 (Photo courtesy of The AP)﻿
It's always great when you wake up early to write and your fucking internet connection is garbage so you have to wait around for it to come back.  Because of that, and because Game 2 starts in less than 4 hours, we'll just cover the major points from last night.

- First and foremost, I'm not even going to mince words here.  CC fucking sucked last night.  I don't know if he was too jacked up, if he was nervous, or if it just came down to him not having a feel for his stuff after another long layoff between starts, but he was a complete disaster out there.  He couldn't throw the fastball for a strike, couldn't establish consistency with the slider, and showed almost no ability to battle back after getting behind in counts because he had no command.

He hung an 0-2 slider to Hamilton belt-high and middle in in the first inning and Hamilton did what good power hitters do with it.  That, along with his fastball almost always been up and away to righties showed how little command CC had last night.  Everything was a constant struggle and he very rarely hit the glove where Jorge set it up.  He also reached 8 separate 3-ball counts through 3 innings, which is unheard of for hiim.  The only good news was that Joe was smart enough to get him out after 4 innings when he couldn't limit the damage after getting the first 2 outs in the inning.  He threw 93 pitches and I'm willing to bet Joe wanted to save him up and bring him back on short rest in Game 4, hoping he would have better command getting back out on the mound sooner, rather than let him run up a pitch count and fall further behind.

- On the other side of the matchup, C.J. Wilson was very effective early last night, throwing a lot of strikes and a lot of strikes early, something that we said was a key for him against the patient Yankee lineup.  Every time you looked up, he was ahead 0-2 or 1-2 and instead of wasting pitches, he kept going right after the Yankee hitters and got a lot of defensive swings.  I was a little surprised Ron Washington brought him back out for the 8th inning as he had clearly started to tire.  Jeter put a good swing on a pitch that didn't have the zip or sharpness to it that Wilson had earlier in the game to drive in Gardner and start the 8th-inning rally, and although he was charged with Jeter's run as well and couldn't get an out in the inning, Wilson certainly pitched better than his final line showed and pitched well enough to win.

- Once again, the Yankees showed how well they think the game, flipping the script on the Ranger bullpen and swinging at the first-pitch fastballs with runners on base.  After Oliver walked Swish and Teix batting right-handed (not a good sign for him going forward), A-Rod and Cano both swung and got RBI singles off of first-pitch fastballs against guys who were brought in specifically to face them.  After being patient and falling behind Wilson for the first 7 innings by laying off the fastball, the Yankees decided to get aggressive, knowing the Rangers were going to throw strikes just for the sake of throwing strikes and it got them back in the game.

- I can't speak for everybody, but after Joba pitched the 5th I saw Dustin Moseley's entrance into the game as a sign of Joe waving the white flag.  With where the game was at the time, they clearly weren't high-leverage innings, but you have to give a call to Moseley for throwing 2 big scoreless innings, striking out 4, and keeping the deficit where it was, allowing the Yankee offense a chance to make the comeback.  After looking a little too jacked in walking Ian Kinsler, Kerry Wood settled down after picking him off and got through the 8th, and then Mo did what he does to save the thing.  Huge shoutout to the 'pen for not just mailing it in but bearing down, getting outs, and not allowing runs.  And nobody had to throw too many pitches so it should be all hands on deck again tonight.

- Gerry Davis was very good behind the plate last night.  He missed a few close strike calls but overall his strike zone was consistent all night long for both teams and he made the correct call on a bang-bang play in the first inning when CC tagged out Nelson Cruz trying to score on a wild pitch.  At first glance it appeared Cruz was in by a mile, but the replay showed Davis made the right call and he was in perfect position to do it.  It's nice when an umpire actually has a good night for a change.

- Top of the 8th: Exhibit S for how valuable Brett Gardner's speed is to the Yankees

- Great at-bat by Thames in the 8th to drive in the winning run off of Derek Holland.  It was a good pitch by Holland and Thames just pulled his hands in and muscled the pitch into left.  Nice piece of hitting.

- Nice work by Holland to get out of the 8th without allowing any more runs after the Thames hit.  He was the only guy out of the Texas bullpen last night that didn't look like he wanted to shit his pants.

- Can anybody get Robinson Cano out?  He sputtered down the stretch in the regular season but looks as locked in at the plate right now as he was in April when he started the season.

- Someone please tell Nick Swisher to stop bunting.  He's terrible at it.  If those calls are coming from Joe then he should be slapped.  If Swish is doing it on his own, Joe should slap him.

Play of The Game: Cano's RBI Single in the 8th

It tied the game and allowed A-Rod to move into better scoring position for Thames' hit thanks to the Hamilton error in fielding the ball.  Without that, A-Rod probably doesn't score on Thames' blooper.

Player of The Game: Robinson Cano

3-4 with a HR, 1 run scored, and 2 RBI, including the first run that got the comeback started in the 7th and the aforementioned game-tying RBI in the 8th.  Not to mention the fact that all 3 of his hits came off lefties.  Ron Washington might want to re-think his late-game matchup strategy with Cano because the dude can hit off of anybody.
Posted by Unknown at 11:21 AM No comments: