Is all that a coincidence?  Highly unlikely.
Posted by Unknown at 9:54 PM No comments:

I know I'm about half a day late posting this, but after seeing the reaction from across most of the blogosphere you know damn well I couldn't stay away from this.

Now I know what most people are expecting me to say here, but I actually sympathize with poor Chan Ho.  Having diarrhea fucking sucks.  I can barely write a goddamn email without risking shitting myself when I've got the squirts, so I can't imagine trying to pitch in a Major League Baseball game where you're grunting and straining and giving max effort on every throw.  There would have been poo juice everywhere if Park stepped on the mound that night, and that's just not something HDTV was invented for.

And more power to Park for coming out and telling it like it is.  None of that "I was sick," "I didn't feel right," "I just didn't have it out there today" cliche nonsense that pitcher after pitcher spouts after not pitching or not pitching well.  Dude had fucking diarrhea, now get off his back.  He wasn't making any excuses, just being honest.  Then you factor in flu too, a lot of cough, chest hurts, and dehydrated or something like that and it's a near miracle that Park is standing there giving that interview.  I almost feel bad for kinda taking him to task last Monday; for all I know the turtle could have been poking his head when Park gave up that homer to Dustin Pedroia.  And that is more than valid excuse.

After watching Park own up and tell the truth for why he was out of the lineup, I am hereby waving the 1-year waiting period needed to declare a player a "true Yankee" and officially calling Chan Ho Park a true Yankee.  Somebody start forging his plaque and make a space for his number to be retired in Monument Park.


P.S.- Shame on Joba and Dave Robertson for laughing in the background.  Especially Joba.  He can barely get out of an inning 1-2-3 when he's not pinching his asshole closed so who is he to laugh at the fecal misfortune of a teammate?
Posted by Unknown at 7:24 PM No comments:

Break Out Your Tuesday Best... 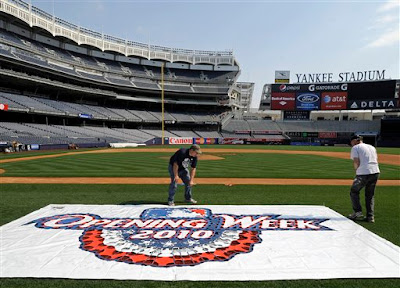 (Courtesy of the AP)
Because tomorrow is going to be the tits and then some! Flyovers, giant American flags, Bernie Williams, and a matchup against a pitcher that the Yanks have a history of smacking around worse than Rihanna. Yes sir, it's shaping up to be a picture home opener. I'm popping half a stack here just thinking about it and I'm not even going to be in the same time zone.

Not to be outdone, the Mets have already reverted to hitting at a 3rd-grade level, they have their ace giving up grand slams to the Nationals, and their closer is more interested in starting fights with Willie Harris than getting outs. All of this after just 6 games.

You look at all that and it makes you feel a little better about the fact that Javy Vazquez getting his face smashed in on Friday night is the Yankees' biggest issue right now. And if everybody else pitches like they have been, that's barely even an issue.

Damn it feels good to be a Yankee fan!
Posted by Unknown at 1:45 PM No comments: