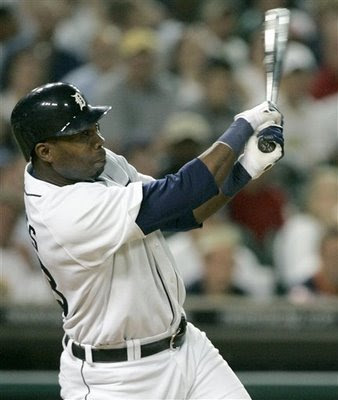 While he's not guaranteed a spot on the team with the minor league contract, the signing of Thames does make the Randy Winn signing all the more puzzling.  Thames gives the Yankees what they needed, a righty power bat off the bench who can play the corner outfield if need be, at less than what they're going to pay Winn to be an unnecessary defensive replacement outfielder who can't hit a lick.  But if last off-season taught us anything, it's 'never doubt Cash.'

The smart money is on Brian having a plan for Thames, even if it's as simple as keeping him on the Triple-A roster all year as a Shelley Duncan-type who can be used as a call up to fill the 25-man roster when somebody else takes a stint on the DL.  But in any case, Marcus' chances of going home for Thanksgiving in 2010 with a World Series bonus and an appointment to get measured for a championship ring just increased ten fold.
Posted by Unknown at 7:38 PM No comments:

Is It Spring Training Yet?

After last night's rather bland Super Bowl, boring, un-funny commercials, and ho-hum halftime show, it's about damn time we get back to focusing on baseball. Screw the NBA All-Star game; forget March Madness (since UConn isn't going to make it anyway); let's just move right on to MLB Opening Day.

Seriously, get me some pitchers and catchers reporting right now. I want daily updates on how Jesus Montero looks behind the plate. I want to see Javy Vazquez and Andy Pettitte laughing and joking while they go about their stretching and running drills. I want to see Brett Gardner and Ramiro Pena showing up early to get more batting practice in to prepare for the bigger roles this year. I want to see A.J. Burnett practicing pitching to a metal cut-out of a batter, "Charlie Sheen in Major League"-style to try and cut down on his wild pitches this year.

P.S.- did anybody else notice the similarities between last night's Super Bowl commercials and Johnny Damon? Both are severely overpriced, both had solid make-ups (lotta funny premises for the commercials; Damon still an above-average hitter), and both had major glaring weaknesses (no solid punch lines on the commercials; Damon's weak arm and presence as an injury risk at age 36). And in the end, there doesn't seem to be much buzz about any of the ads the day after just like there hasn't been any buzz for Damon since the 2009 season ended.  Just a thought.
Posted by Unknown at 1:36 PM No comments: