The Yankees took a risk re-signing Jayson Nix the way they did and then DFA'ing him to clear a roster spot for Mo.  That risk became even bigger when Alex Rodriguez's injury was announced on Monday, and bigger still when the Yankees failed to lock down a replacement this week at the Winter Meetings.  But the risk paid off yesterday when Nix cleared waivers and was assigned to Triple-A.  At least now the Yankees have one viable, albeit nowhere near ideal, in-house option to play the hot corner if need be.

Nix was the definition of replacement level in 2012, but he did prove useful to the Yankees with his ability to play multiple positions.  They were lucky to have him on the roster when A-Rod went out with the broken hand, and Nix did get the majority of his work in at third this past season.  He's certainly not enough as an everyday option to make Cash call off the search for a full-time replacement, but Nix can handle a bat, has just enough pop to be taken seriously, and can handle his business in the field.

I don't expect that Nix will be the Opening Day third baseman, and the Yanks could certainly do a lot better than him.  But they could also do worse, and were doing worse with what they had readily available before he cleared waivers yesterday.  Nix is at least something, and something is better than nothing.
Posted by Unknown at 3:54 PM No comments: 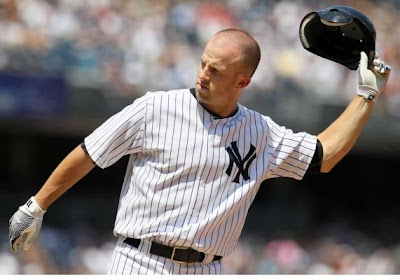