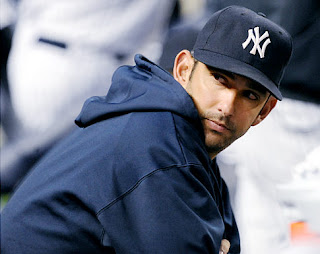 (Might have to get used to this position.  Courtesy of The Daily News)
I honestly didn't see this coming.  I know I've been tough on the guy a few times before, but I honestly did not see Jorge Posada falling off the cliff the way he has this season.  I actually expected his offense to improve a bit on the last couple years now that he wasn't going to have to deal with the constant injuries that a catcher accumulates over a season, but based on his output this year and Joe's decision over the weekend to bench him in favor of Eric Chavez at DH, I think we can officially say that Jorge is done.

Just looking at Jorge's numbers this year starts to bring the sandwich I just ate back up my throat.  For the season, he currently stands at a .230/.309/.372 tripleslash in 317 PA, good for a .299 wOBA and an 84 wRC+.  Between his terrible hitting, sloppy defense during the few times he has been on the field, and the fact that he runs the bases like a drunk, blind toddler with polio, Jorge has been worth -0.7 WAR this season, by the far the worst of any Yankee hitter with more than 100 PA.  He had a rough April and May, then seemed to get it together after the taking himself out of the lineup incident to post a .382/.419/.588 line in June.  But since then, he has come crashing back to earth in an even bigger way than he did in the early months.  July saw him put up a .534 OPS and .240 wOBA, and so far in August he's just 3-18 with 1 XBH, 1 RBI, and 4 Ks.  If his name wasn't Jorge Posada and he was putting up numbers like that, he wouldn't have made it past the middle of July before getting the invitation to ride the pine, so it's not like the Yankees didn't give him enough of a chance to pull out of a slump.  It was a perfectly justifiable move to demote him and go with the platoon of Chavez and Jones at DH.

And the saddest part is, it's not like Jorge's approach has changed to a point where it's affecting his ability to play at a high level.  His BB rate, while lower than his career average, is still a decent 10.1%, and his K rate of 19.9% is actually DOWN from the last 2 seasons.  But his BABIP of .264 and ISO of .142 are both career lows and he's hitting fewer line drives than ever and more ground balls than he has since '04.  He's still seeing pitches and taking the same swings, there's just no power left in the swings and no life left in the bat.  And since the Yankees have already taken the glove out of his hand this season, that really leaves nothing for him to bring to the table.

So now what will become of Jorge?  He won't be getting much burn, if any, barring injury to Chavez or Jones, and there is the continued prospect of Jesus Montero getting the call up to the Majors in the near future.  And as Mike at RAB pointed out yesterday, the Yankees are in a bit of bind in terms of roster flexibility thanks to their current 6-man rotation and 13 pitchers total being carried on the roster, so the situation that would work to the team's advantage would be to cut Jorge.  But with the way the Yankees treated his earlier tantrum this year, the amount of time they gave him to prove he was worth keeping in the everyday lineup, and the fact that they've completely caved on handling Derek Jeter's aging gracefully, I don't see that happening.  He may not get another at-bat this year, he may not make the postseason roster, but I just don't see the Yankees kicking one of their legends of the recent dynasty to the curb mid-season.

A scenario that could work could be the following.  There's no need to keep 13 pitchers on hand right now, especially when one of them is Hector Noesi, a guy who could be a legitimate option for the back end of the 2012 rotation.  Send Noesi down to the Minors to finish the season getting stretched back out as a starter this weekend and call up Montero.  Then when The Horse returns some time next week, the Yanks could send Cervelli back down to Triple-A, install Montero as the official backup catcher, and still maintain that 25th roster spot for Jorge.

It's not the ideal situation for Jorge, who's obviously a proud player and none too happy about his demotion, nor for the Yankees, who I'm sure would rather have 25 men on the 25-man roster who can actually play and play well.  But all things considered it's probably the best way to get through this month until rosters expand.  It's certainly not the way Jorge envisioned his career ending, and it's not what I saw happening, but it looks like we could be watching the end of an era over the next 2 months.
Posted by Unknown at 12:44 PM No comments: 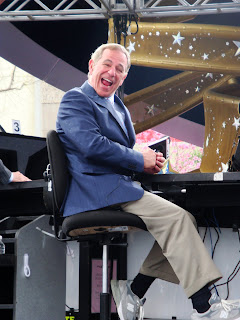 What's really astounding is how Kruk and Valentine bring home a paycheck for this type of analysis.  Just another case of lazy, unfounded, anti-Yankee commentary from the Worldwide Leader in Fraud Sawx Fans.
Posted by Unknown at 7:24 AM No comments: