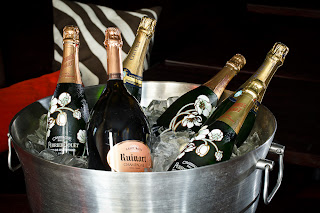 I've got the champagne on ice, the confetti poppers on standby, and the leftover New Year's noisemakers ready for the moment the A.J. trade to the Pirates becomes official.

There's no indication it's going to happen today.  The talks are now centering around the money, with the Pirates being willing to pay $10 million and the Yankees looking for a 50/50 split, and Garrett Jones is off the table, but every indication is that talks are moving forward and every report coming in from the Olneys and Rosenthals of the world make it seem like it's only a matter of time.

And if that's the case, then I'm damn well not going to be unprepared for the announcement.
Posted by Unknown at 3:28 PM No comments:

Breaking Down The Spring Training Invitees

With the countdown to Spring Training now in the single digits, the Yankees made their roster of players who will attend final on Thursday, announcing their list of 27 non-roster invitees.  With the majority of what will eventually be the 25-man roster already all but set in stone, few of these 27 guys have a real shot at making the Yankees out of ST, and even fewer will end up making it after all the trade/FA dust settles in the next week or so.  With that mind, I decide to break these 27 down into categories so you'd know who's who and who's here to do what this Spring Training.

There's going to be a ton of pitchers at Spring Training and they've all got to get work in.  Russell Martin and Francisco Cervelli can't catch everybody, so these guys will be here to help handle the workload behind the plate.  With the real catching roster battle being between Frankie and Austin Romine for the backup role, these guys will start to be cut as roster cuts are made and fewer pitchers are on hand.  Sanchez and Murphy will get some attention from the coaching staff thanks to their prospect status, but they're both too far away from the show for real consideration.

All three of these guys are on the Yankees' radar as future pieces of the pitching staff, but for a variety of reasons (inexperience, injuries, development) they are all far enough away that there is no chance of them making the show this year.  This is more like a first-round "American Idol" audition for these three.  If Joe and Larry Rothschild like what they see, they might give them a ticket to Hollywood.  But there's almost no shot of them being roster finalists in 2012.

Warren could see himself in pinstripes if injuries strike the rotation during the season.  Banuelos likely won't, but can use this ST as an audition for the 2013 rotation, especially if he shows improved command.  Pope, Whelan, and Whitley could all be considered for injury replacement bullpen roles during the regular season and can also secure a call up in September by having good showings in ST.  All of these guys are pitchers who could help the team in the next year or so, and will be watched more closely than the three in the previous category.

It would be a legitimate shock if any of these players made the club.  You're talking everything from age-related decline to performance inconsistency to major injuries that have affected these gentlemen's careers, and it will take a lot, and I mean A LOT, for them to make their way onto the 25-man.  The most intriguing options here are Miller because of his stuff and Cedeno just because he's a lefty.

I don't expect anybody from this group to make the team out of ST and I don't think anybody else does either.  But they all have something working to their advantage that could give them a leg up on their competition come decision time if they really shine in camp.  Curtis and Wise both have OF experience at the Major League level, and Curtis has the added bonus of that experience being with the Yankees.  O'Conner has been around a long time and is a lefty, although he has the biggest uphill battle to climb.  And Vazquez, as much of an "all or nothing" hitter as he may be, has nowhere to go but up.  With the DH spot not locked down, he could force his way into the discussion with a big power display.

The way I see it, these are the only guys with a real chance to make the Yankee 25-man roster this spring.  Right now there is one spot in the bullpen and two spots on the bench up for grabs and these guys are the leading candidates for those spots.  Delcarmen and Okajima will likely be battling for that last spot in the 'pen, assuming A.J. is eventually traded, and based on the Yankees' familiarity with both of them, either can win with a good showing.  Branyan is the leading candidate for the lefty DH spot on the bench right now, at least until Eric Chavez is signed, and helps his case by being able to play first if needed.  And Hall is also most likely to get the 13th bench spot because of his ability to play multiple infield positions and a Major League track record, even over a guy like Brandon Laird.

It's unfortunate that Hall has to be put in that last category, because he sucks, but that's the way I see these guys shaking out right now.  This could all change in the next week if the Yankees do sign another FA DH candidate or complete the A.J. Burnett trade for something useful (Garrett Jones), but right now that's the breakdown of the lucky 27.
Posted by Unknown at 11:26 AM No comments: