Yankees Draft Somebody In The First Round

So apparently the Major League Baseball draft was last night and apparently the Yankees took a high school shortstop named Cito Culver with the 32nd pick of the first round.  See, here he is: 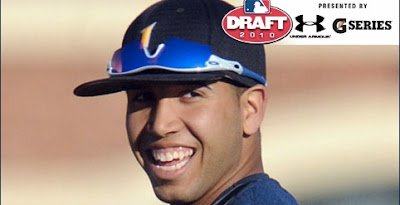 (Photo courtesy of MLB.com)
The book on this kid is that he's got a great arm and is a great athlete that still needs to put the polish on his overall fielding and hitting, but the Yankees were high on him so they reached.  The MLB draft is such a crapshoot that it's almost impossible to predict who will turn into something and who won't, so I'll let all the other blogs analyze the shit out of this kid.
If the Yankees actually do sign him and pull him away from his commitment to Maryland, give him a couple years in the Minors and then come back and talk to me.  In the mean time, I've got division standings and bullpen issues to worry about.
Posted by Unknown at 9:45 AM No comments: