Granderson Out A Month? Javy To The 'Pen? 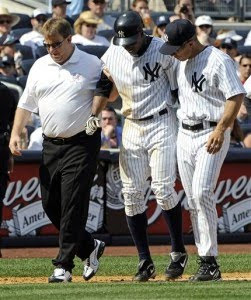 (Photo courtesy of Bill Kostroun, The AP)
From LoHud:

"Joe Girardi said at this morning’s press conference that he will probably be out a month. Granderson was limping a lot when he got to the clubhouse, but he said he was feeling a bit better from yesterday. For now, it’s Marcus Thames and Randy Winn in a left-field time share, with Brett Gardner shifting to center."

So things go from bad to worse for C-Grand, who hadn't exactly been killing it before he got hurt yesterday. A month for a speed guy like Granderson pretty much means he won't be playing in the Majors for at least 6-7 weeks. You don't strain your groin and then just start running full speed again after a month.

Interesting choice to call up Mark Melancon to replace Granderson on the 25-man. Between Gardner's D and continued production at the plate and Thames being a wrecking machine at the plate right now, I guess Joe feels confident that the Yankee lineup won't be greatly affected by C-Grand's absence. The Melancon move signals that Joe is more concerned with getting the bullpen righted and that Dave Robertson is probably getting bumped down in the bullpen pecking order as he still can't get it figured out this year.

Even more intriguing could be what the Melancon call up means for Javy Vazquez, who had arguably his worst outing of the year yesterday. Joe hasn't committed to letting him pitch in Boston next week and with another arm in the 'pen now, we could see Sergio Mitre get a shot in the rotation as Phil gets bumped up to the 4-spot. I would say Hughes' performance today and how Melancon handles his first work back at the Major League level will dictate whether Joe goes that route or not, but right now it's looking like everything is set up for Javy to get dropped in the bullpen to get his shit together.
Posted by Unknown at 12:06 PM No comments: