A.J. Being A.J. (Whatever That Means) 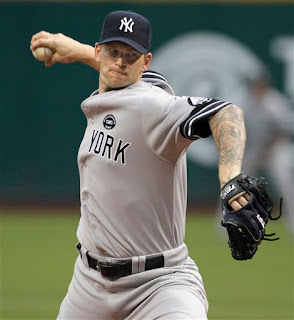 (Photo courtesy of The AP)
2 straight scoreless outings for A.J. Burnett?  Is that even possible?  Somebody check the calendar, did it secretly become 2012 while I was asleep last night and we're now only seconds away from the end of the world?  That's the only explanation I can come up with.

Well that and the fact that A.J. has remembered how to throw his curveball for a strike.  That always helps.  And he also said "It’s the most I’ve felt like A.J. in a long, long time" after the game last night, so the case of mistaken identity he had been suffering from must have had something to do with his struggles.

Question, who the fuck did he feel like prior to these last couple starts when he was getting shellacked?  Kenny Rogers?  Kei Igawa?  Joba?  These are the follow-up questions that the beat writers need to be asking.  I'm talking to you, Chad Jennings!!
Posted by Unknown at 10:43 AM No comments: