(Originally posted at IIATMS/TYA.  And "Project 189" is going to be an ongoing series for the next week and change, so make sure you keep following each day to see every writer's version.  Fair warning, this post is long as shit)

The latest chapter in the A-Rod/MLB saga stole the show yesterday and with good reason.  When something this big reaches the level of absurdity that it did and when Mike Francesa gets added to the mix, that's a situation that deserves everyone's full attention.

But if in the wave of A-Rod reports you happened to miss the start of the IIATMS/TYA "Project 189" series yesterday, please stop reading this immediately, scroll down the page a bit, and catch up on that because you're missing out if you don't.  The series is the brainchild of Michael Eder, who wanted to know what kind of team that Yankees could go out and build while still trying to stay under the luxury tax threshold if they didn't have A-Rod's salary on the books next year.  That looks like an even greater possibility than it already did after yesterday's events, and Mike kicked off Project 189 yesterday by setting the bar pretty high.

MIke's version of the 2014 roster had power, lineup balance, and probably the best team defense that the Yankees have had in a long, long time.  Today it's my turn to follow that up and offer my version of Project 189.  Remember, the point of these posts is not to make predictions on what we at IIATMS/TYA think the Yankees will do but rather to examine all the possibilities and stimulate some thought and discussion about what they could do.  And another reminder that the salary and arbitration numbers being used in these posts are from MLBTR's free agent profiles.  We're aware that the actual numbers might come out differently, but for the purposes of standardization in the series it's what we chose to work with.

Without further ado, my Project 189 roster. 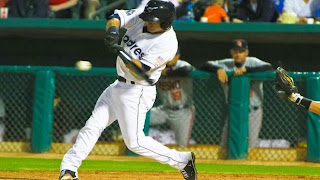 It's not in the same universe as trading for Chase Headley, but the Yankees and Padres hooked up for a small trade yesterday that does bring a little more infield depth to the Yankee roster.  The Yanks acquired MiL infielder Dean Anna from San Diego in exchange for High-A pitcher Ben Paullus.

He's never been much of a power guy and will likely be even less of one at the Major League level, but Anna does appear to be a step up from Corban Joseph, the player whose spot he essentially took on the 40-man roster.  He can play more positions defensively, and the fact that shortstop is one of them suggests he's got a better arm than CoJo.  While I wouldn't anticipate Anna seriously factoring into any 25-man roster competitions, he's a nice utility piece to have on hand in case of injuries.

Yesterday was the deadline for teams to reset their 40-man rosters before next month's Rule 5 Draft and as expected, the Yankees were very active in protecting some of their top eligible guys.  They added 6 players to the 40-man: Gary Sanchez, Slade Heathcott, Bryan Mitchell, Shane Greene, Jose Campos, and newly acquired Triple-A infielder Dean Anna (more on him later).

The players left unprotected were relievers Tommy Kahnle, Dan Burawa, and Chase Whitley.  None of those decisions come as a surprise, although it is a bit of a bummer to not protect a strong Triple-A arm like Whitley.  There's a good chance at least 1 or all 3 of those guys get picked next month.  Luckily, hard-throwing bullpen arms are a source of major depth in the Yankee system.

There was one roster casualty yesterday, Tsecond baseman Corban Joseph.  He was outrighted off the roster and back to Triple-A after clearing waivers.  He struggled with a shoulder injury this past season and with Anna now on the 40-man his dwindling prospect status takes another hit.