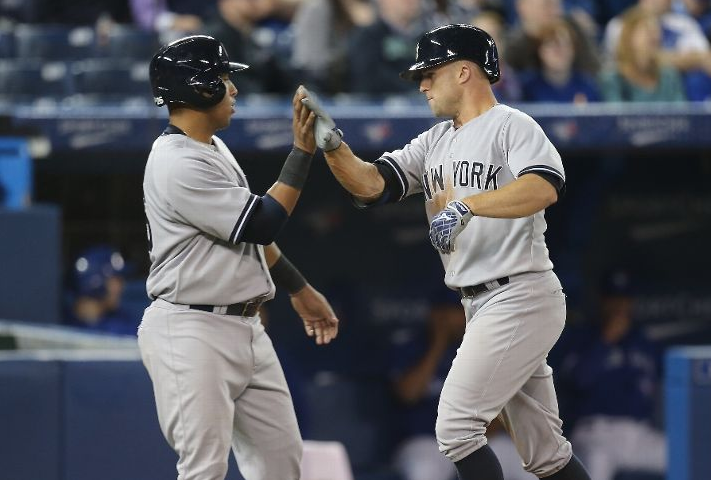 The Yankees have had a rough first trip to Toronto.  On Friday night they lost their starting first baseman to injury and on Saturday their punchless, Teix-less lineup wasted a very good debut starting performance from Michael Pineda.  A win today would have been a nice way to finish off this tough series and head back home for Monday's Yankee Stadium opener with a series victory and some momentum.  The rotation had cycled back around to CC Sabathia, and the big fella was looking for a continuation of his strong Opening Day finish.

- He got staked to a 3-run lead in the top of the 1st thanks to some patience (2 walks), some speed (Brett Gardner SB), and some power (2-run double by Kelly Johnson) from the lineup.

- Just like on Opening Day, things didn't start off well for CC.  He gave up a solo HR to Melky Cabrera to lead off the bottom of the 1st, but didn't let it snowball into anything more and quickly found his groove.  He retired 15 of the next 17 hitters he faced to cruise through the 5th.

- A leadoff walk got the Yankee offense going again in the top of the 4th.  Another Yangervis Solarte double plated 1 run and a follow-up 2-run homer by Brett Gardner made it a 6-1 game.

- Bad GB luck hurt Tanaka on Friday night, and it bit CC a little bit in the bottom of the 6th.  With 2 outs, he gave up a bloop single, a deflected GB double, and a GB single that snuck up the middle to plate 3 Toronto runs and get the Jays back in the game.

- The offense didn't score any more after the 4th but they didn't need to.  Adam Warren, Shawn Kelley, and David Robertson combined for 3 scoreless innings after CC and gave the Yanks their first series victory of 2014.

Pineda's First Start Highlights The Need To Develop His Changeup 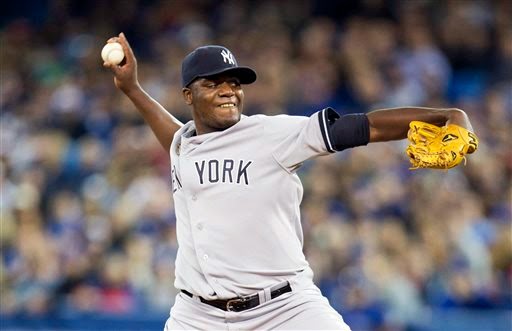 For reasons related to my post-UConn victory celebration last night, I was unable to recap yesterday's game.  The game marked the second straight Yankee debut for a highly-touted young pitcher, only this time it was a player coming back from injury rather than pitching in his first MLB game.  Michael Pineda was outstanding yesterday, allowing a single run in 6 innings of work, walking nobody, and striking out 5.  He threw 83 pitches, 58 for strikes, and his stuff looked very good.  His fastball was lively and averaged 94 MPH and his slider was very sharp, drawing 7 swings and misses.  He even mixed some cutters in.

If there's one negative to take away from Pineda's start yesterday, it was the lack of changeup usage and the problems it caused him against left-handed hitters.  He faced lefty swingers 12 times and they were responsible for 4 of the 5 hits he gave up, including 2 hard-hit doubles and an RBI single.  The development of Pineda's changeup was supposed to be what helped him against lefties, but there wasn't much sign of it yesterday.  He only threw a change once.

We had heard that Pineda was working on his changeup during his MiL rehab starts and bullpen sessions last year, and I thought I read somewhere that it looked better early in spring camp.  If yesterday's start was any indication, however, he still has a long way to go to make it a useful pitch for himself.  Hopefully he starts to work it in more and gets more comfortable with it.  He's going to need it to keep lefty hitters honest.

Posted by Unknown at 2:49 PM No comments: