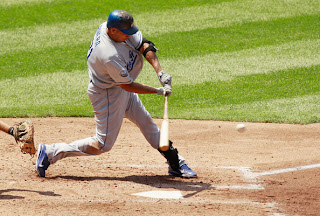 As first reported by the ESPN NY comedy duo of Marchand and Matthews, the Yankees have signed Juan Rivera to a Minor League contract with an invitation to Spring Training.  No details yet on what the dollars will be if he makes the team, but Rivera will join Matt Diaz, Russ Canzler, and the litany of other internal and external candidates competing for a spot on the 2013 Yankee bench.

Defensively he's not much, and could only be used in the outfield corners, and there isn't much else he brings to the table.  But for the purposes he would serve with the Yankees this is as good a cheap signing as any.  Rivera has a long Major League track record, a recent Major League track record, and a positive split against southpaws, which is more than you can say about some of the other guys they've brought in.  Even as a player clearly in decline, Rivera falls right smack dab in the middle of the early roster battle I laid out this afternoon.
Posted by Unknown at 4:51 PM No comments: 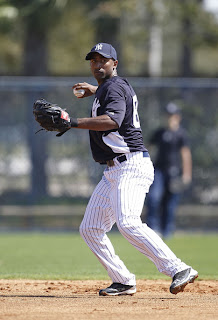 I commented last week on Cash's statements regarding the current Yankee roster construction, and the declaration that the team would be willing to go to Tampa with "what they've got" right now.  By my count, there are still 4 roster spots unaccounted for, almost all of them on the bench, and the group of candidates to fill those spots is uninspiring to say the least.  But it's looking more and more likely that this group, and maybe an additional cheap MiL signee or 2, are going to be the players battling it out for the final 4 spots, and that being the case we might as well start separating the real contenders from the pretenders.  Spring Training is still a few weeks away, so I'm going on nothing more than past performance and perceived team needs, but here are my early rankings for who I think should get the final 4 roster spots.
Read more »
Posted by Unknown at 12:06 PM 2 comments: 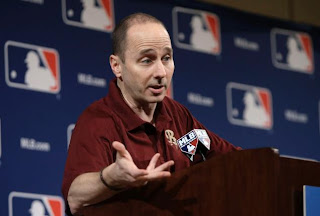 As it is, the Yankees have seen their monetary advantage shrink over the past few seasons as teams started signing their own players to new deals before they hit free agency.  Now, with that spending already capped and more teams working to extend their big names, any plan to reload after reaching 189 could prove useless if there are no big free agent targets left.
Read more »
Posted by Unknown at 7:43 AM No comments: