It's a question that's been going around a lot this week.  With all the conflicting reports on the Yankees' interest in Drew and his interest in the Yankees, it's hard to know where the truth lies either way.  The need is obviously there from the Yankees' standpoint.  Their infield is currently the biggest weakness on the roster, and Drew would help fix some of those cracks.

The short answer is yes, they should.  Drew would be at worst as good a starting third base option as Kelly Johnson, and he would allow the Yanks to move Johnson over to second base, his better position.  He could be injury insurance for Derek Jeter at short this season and slide in and take over the job for a year or 2 after Jeter retires.  He's not too old, his left-handed swing would play well in YS3, and it wouldn't take crazy money or years to get him.

Not A Prospect Yet (But Worth Watching): Omar Luis Rodriguez 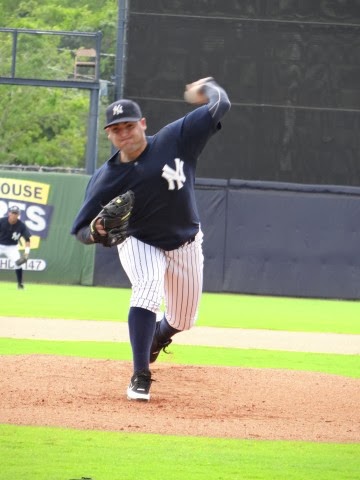 It's a mere 2 days until the start of AB4AR Prospect Week 2014.  It's right there, folks.  You can almost reach out and touch it (you can't).  As another lead-in to that magical week, let's look at yet another young player in the Yankee system who's making some noise but not enough to crack this year's AB4AR Top 30.  We went international on Tuesday and we're staying there today.  This time, however, we're stepping it up from the small money surprise signings and focusing on Cuban pitcher Omar Luis Rodriguez, the last big signing bonus swing the Yankees took before the new international spending rules were put into effect in 2012.