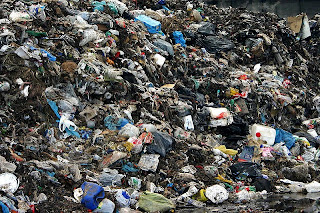 Get it?  It's a visual metaphor for how the Yankees played like trash all weekend.  Pretty clever, huh?

I got nothing else to say tonight.  Updated playoff roster coming tomorrow...
Posted by Unknown at 8:37 PM No comments:

Well it's a good thing the internet connection was fucked at my apartment all day yesterday, because after the last 2 games, my immediate postgame responses would have been much harsher than this morning's will be.  As it is, the Yankees have opened the door for the competition and their critics with 2 consecutive losses against a likely playoff opponent in 2 games that they could and should have won.

Let's start with Friday.  Another "meh" start by Javy gets picked up into a potential win situation heading into the bottom of the 8th after a bases-loaded walk to Teix in the 6th put the Yanks ahead 5-4.  Enter Joba in the 8th and exist baseball into the bleachers on his first pitch to Nelson Cruz.  Goodbye lead and goodbye win after 13 innings when the Yanks could do nothing in extras off the Rangers bullpen and Cruz put on an encore home run performance off of Chad Gaudin.

The Yankees were a combined 3-17 with RISP on Friday night, and in the 12th and 13th innings had the go-ahead run at 3rd with 1 out and couldn't get anything across.  Joe also showed how important winning that game was, using Phil Hughes out of the bullpen in the 9th and Mo for 2 innings in the 10th and 11th.  The Yanks couldn't scratch a run across and that extra work on Mo would come back to haunt them the next day.

Now yesterday.  Another close game, another "meh" starting performance by A.J., who was pulled after 4 innings and 88 pitches, and another late-inning Yankee lead courtesy of an A-Horse 3-run double in the 8th.  Mo entered the game in the 9th and commenced with a Joba-like meltdown.  Leadoff walk, single, double, and just like that the lead was gone.  After an intentional walk to load the bases and an out, Mo hit Jeff Francoeur with a pitch to force in the winning run.

Mo looked completely awful yesterday.  21 pitches, only 9 of which were strikes, a day after he worked 2 innings by throwing 20 of his 23 pitches for strikes.  Joe had said he didn't want to use Mo for more than an inning during the regular season, but in the last 2 days he has not only broken that rule, but then brought him back the day after to close out a game in which Mo was clearly not ready to be used again.  While it's always a little strange to see Mo that off his game, it almost should be expected from a 40-year-old pitcher who worked multiple innings the day before.  Sometimes we need to remember that Mo is human, and he is old, and yesterday we saw the end result of an old pitcher who had been overworked.

The offense cost the Yanks more on Friday (even though they were just 3-13 with RISP yesterday) and Joe cost them the win yesterday with his decision making on Friday.  But the bottom line is the Yanks lost 2 close, playoff atmosphere-style games in a row in which they had the late in the 8th inning or later and now the Yanks find themselves just a half game up on a surging Tampa team and on the verge of getting swept by a club they could face in the postseason.  The suddenly mortal (and possibly injured) Cliff Lee is on the hill today for Texas against the always-mortal Dustin Moseley, and even though their playoff ticket is all but punched, with Tampa breathing down their necks and a big series in the Trop looming, I say this is a must-win for the Yankees today.
Posted by Unknown at 9:18 AM No comments: