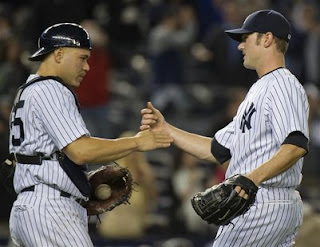 (Hey look!  It's the new closer!  Courtesy of Reuters)﻿

The biggest non-Mo talking point since Mo went down with his ACL injury has been who should take his place as closer this season.  It was talked about immediately after the injury was confirmed, it was talked about after D-Rob handled the 9th inning in order in a non-save situation on Friday night, and it was talked about again after he did his normal tightrope walk routine to close out the win last night.  Obviously the only 2 real candidates are Dave Robertson and Rafael Soriano, but I still feel like I have to ask this.  Why is anybody even talking about this in the first plate?  Why is there even cause for a "Robertson or Soriano" discussion?  Did I get transplanted into an alternate reality where Rafael Soriano is a better pitcher than Dave Robertson?  That's the only thing that I can think of that would explain this situation.

It's real simple, people.  Dave Robertson should be the closer.  And the reason he should be the closer is that he's simply a better pitcher and a more effective reliever than Rafael Soriano.  For all the talk about how erratic D-Rob can be and how many walks he issues and how you don't want runners on base in the 9th inning, the fact remains that Robertson has showed a consistent ability over the last 2+ years to get big outs when he needs to get them in a variety of different high-leverage relief situations.  And if you want to talk about walks, let's talk about how before last night Robertson had issued just 3 walks in 12.0 IP this season, good for a 2.25 BB/9 value that was only slightly higher than Mo's 2.16.  Robertson has shown serious improvement in his command and ability to throw strikes and paint corners, and has done it without sacrificing any of the nastiness of his stuff that allows him to rack up his dominant strikeout totals.  If that doesn't work for you, try these nuggets of knowledge on for size.

Some Designated Food For Thought

Just in case anybody wanted to reignite the "Cash blew the Montero trade" fire after the latest news of Jose Campos hitting the MiL DL with elbow inflammation.  Not having Montero's bat in the lineup has not hurt the Yankees at all this season. 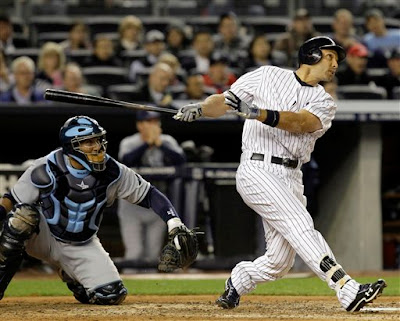