As the rotation cycles back around to Phil Hughes' turn again, and he makes his first start since his outstanding complete game against Detroit last Sunday, it's worth taking a look at the individual performances of each member of the rotation the last time through.  Take notice of who had the worst outing.

There really isn't a bad outing to be found in there, and I'll take rotation-wide production like this 25 hours a day/8 days a week, but the big fella was thoroughly outpitched by the rest of his rotation mates.  We're living in a world where CC Sabathia is presently the Yankees' worst starting pitcher.  It's some straight up bizarro world shit, and it can only be the latest sign that the end of days are near, but I'm OK with it.

Posted by Unknown at 5:09 PM No comments:

The bullpen has been the biggest source of the Yankees' injury woes this season (see: Rivera, Mariano).  But over the past couple weeks, some of the key members who aren't lost for the season have been making progress towards their returns.  One will be able to return sooner than others, but both the short and long-term prognosis for the re-strengthening of Yankee bullpen depth looks good.

After the jump, here's a quick update on 3 key guys. 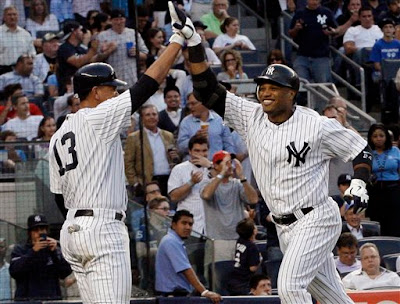 (You'd be smiling too if you had a swing that sweet.  Courtesy of The AP)﻿

I threw down the gauntlet before the game and the Yankees responded.  The overall sloppiness that permeated their series-ending game against Tampa on Thursday night was nowhere to be found in the Subway Series opener at The Stadium last night.  The offensive jumped all over Johan Santana early, and Hiroki Kuroda was spectacular as the Yankees cruised to an easy win.

- After both pitchers worked quickly through the 1st, it looked like we could be in for a low-scoring night, but the Yankee offense struck in the bottom of the 2nd when A-Rod led off with a walk and Robbie Cano smacked the first pitch he saw for a 2-run homer.

- It didn't take long for the Yanks to build on their early lead, as they came right back in the 3rd and pounded Santana.  After getting 2 outs, A-Rod reached again and Cano did the exact same thing he did the previous inning, murdering a hanger for a 2-run HR into the second deck in right and a 4-0 Yankee lead.

- But it didn't end there.  Nick Swisher followed that up with a solo shot of his own, and Andruw Jones did as well for the Yankees' first back-to-back-to-back HRs since last season and a 6-0 lead.  Oddly enough, it was the same 3 guys who did it last year.

- It was hard to say if Santana was still feeling the effect of his marathon outing last week, as he struck out 5 early, but he did seem to tire quickly and his command in the strike zone was not there.

- Kuroda was the exact opposite.  He was money from the word go and waltzed through the first 5 innings, allowing only 1 baserunner on a Derek Jeter error and striking out 6.  He had all his pitches working and used all of them to stifle the Met lineup.

- Scary moment for Kuroda in the 7th. After losing his no-hitter the previous inning, he continued to mow down the Mets until he took a line drive off his left foot.  A-Rod caught it for the out, but Kuroda limped off the mound and did not return to the game.

- With Kuroda out, the Yankee offense turned it back on for some insurance in the bottom of the 7th with a sac fly by A-Rod, RBI double by Swish, and RBI single by Jones to make it 9-0.

- In Kuroda's absence, the Yankees used Cody Eppley and the recently called up Ryota Igarashi to finish the game off.  Igarashi allowed a late run in the 9th to break up the shutout.