As an avid, dedicated beer drinker, there's nothing more disappointing to me than watching bartenders empty the last remnants of a keg into a pitcher and just dump it when they're changing kegs over.  A couple of us from the office went to a bar for lunch today and I watched the bartender fill 4 large plastic pitchers with Sam's Summer and pour it right down the drain.  It broke my heart.  If I was a cat, I would have lost 4 lives just from witnessing that tragedy.  We offered to drink them, I even offered to pay for them, but she was having none of it.  I don't know if there's liability in that or something, but it just seems like a waste of money for the bar and a waste of precious alcohol for me when bartenders do that.  It might be a little skanky from being the ass of the keg, but it's still beer damnit!  Now onto the links!

- On Sunday, Josh Norris of Minor Matters was back with some more anonymous scouting reports on top Yankee prospects, this time guys from High-A Tampa and Double-A Trenton.

- On Monday, William Juliano of The Captain's Blog crunched the numbers to show just how good Hiroki Kuroda has been at The Stadium this season.

- Bryan V of The Greedy Pinstripes gave his thoughts on Joba Chamberlain's future and why he sees Joba as a Yankee long-term.

- On Tuesday, Chris Carelli of Yanks Go Yard came up with the best idea for how to react to Derek Jeter's fantastic season, just sit back and enjoy it.

- Rob Steingall of Pinstripe Alley wondered about Michael Pineda and whether he will become the next Carl Pavano-type bust.  I hate that a comparison like that has to be already, but it's not entirely unwarranted.

- On Wednesday, Mike Ashmore of Thunder Thoughts caught up with former top Yankee prospect Dioner Navarro, now with the Reds.

- Got a pair from the TYA team.  On Wedneday, Mike Eder investigated Ichiro's slight power surge since joining the Yankees and the possible connections to Kevin Long's coaching and philosophy.

- On Thursday, EJ Fagan made a strong case for the Yankees getting in on any possible future trade action involving Elvis Andrus.  More than any other scenario, that move would make the most sense in replacing Jeter at short.

- Brien Jackson of IIATMS formulated a very intelligent and logical reaction to Skip Bayless' troll-tastic insinuation that Jeter could be juicing.

- Fishjam25 of Yankees Fans Unite looked at how the Yankees' 2014 payroll budget plans could be affected by the really poor 2012 results of their young crop of pitchers.

- Mike Axisa of RAB commented on Phil Hughes' increased use of his changeup in his last 2 starts, something that almost all of us have been calling for for some time now.

- It's not Yankee-related, but if you missed Mike Francesa's show-opening, voice-cracking, screaming-at-the-top-of-his-lungs rant about how horrible the Mets have been, do yourself a favor and check it out.  It's 10 minutes long, but worth every second.  I actually thought he was going to keel over in the booth at one point.

- On Friday, SJK of NoMaas laid out the landscape in Yankeeland right now and tried to pinpoint exactly what is and isn't the cause for their current struggles.

For the Friday Jam I'm going back to an old standby and all-time favorite, Queens of The Stone Age.  It's been a while since I've used them and there's certainly no shortage of awesome QOTSA material to choose from.  Today we're going with "A Song for the Dead," which was never released as a single but is still arguably one of the top 3-5 greatest QOTSA songs ever.  The fact that I missed their Sunday set at PJ20 last year when they played this song makes me sad. 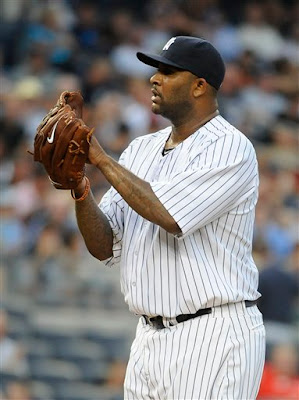 The 10-game division lead has evaporated down to just 2.5 games after Tampa Bay's win last night.  You have to give credit where credit is due, Tampa is playing out of their minds good right now.  Everybody in the rotation is pitching lights out, the offense is better with Evan Longoria and Matt Joyce back, and they're going out and winning game after game while the Yankees struggle to put 3 decent innings together.  This last month is shaping up to be an exciting one, and hopefully the injuries haven't caught up to the Yanks so much that they lose what should have been an insurmountable lead.  But before they get started in Cleveland tonight, I'd like to take this time normally reserved for game recaps to empty the old memory bank.
Read more »
Posted by Unknown at 7:43 AM No comments: