Well I can't say I this coming so early.  Via Ken Rosenthal, the Yankees and free agent catcher Brian McCann have agreed to a 5-year/$85 million deal.  The deal also has a vesting option that could bring the total to 6 years and $100 million.

The report has been confirmed by Mark Feinsand, so it sounds like this is a done deal pending a physical.  McCann was one of the Yankees' major offseason targets from the beginning and he's an obvious great fit for the stadium, the team, and the pitching staff.  My FA profile on him can be found here.  Cash recently said the team was "absolutely" going to tender a contract offer to Cervelli this year, so now there's an overabundance of catching depth.  Expect Stewart to be non-tendered and maybe one of the Romine/Murphy tandem to be traded.

More details to come on this as they become available.  The first big offseason stone has been cast.  Let's see what chips fall as a result.

** UPDATE 6:34 PM- David Waldstein reporting that the deal is actually worth $82.5 million and still has not been finalized.  Stay tuned... **

** UPDATE 9:34 PM- Missed this earlier but via Jon Heyman, the contract comes with a full no-trade clause.  That and the vesting option make the deal a little more of a risk for the Yankees, but it's still a very good one for the best player available at the position. **
Posted by Unknown at 5:25 PM No comments:

Since the acquisition of Dean Anna a few days ago, there's been a lot of talk about what other roster moves might be coming.  I've seen more than a few people suggest trading Eduardo Nunez, but let's be realistic here.  Teams aren't lining up to trade for a utility infielder who can't field or hit, no matter what his age and upside may be.  Nunez's trade value has all but expired and if they aren't going to DFA him, the best thing the Yankees can do is hold onto him and hope he can provide some value in limited work.

A better idea if they're looking to move an infielder for something might be to trade Corban Joseph.  He was excommunicated from the 40-man roster to open up a spot for Anna, a pretty damning statement about where he stands in the organizational pecking order these days, but in terms of trade value he still has to have more than Nunez. 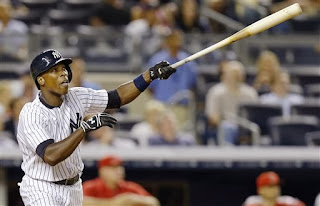 Don't lose sight of the fact that Soriano is 36, turning 37 before the start of the 2014 season, and has numbers indicative of a player who outperformed his true skill level in his 58-game Yankee sample size and could be losing bat speed.  He'll contribute next year, but that contribution won't be close to the near 50-HR pace he was on after the trade.

Posted by Unknown at 8:39 AM No comments: