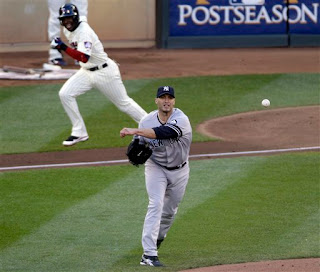 (Photo courtesy of The AP)
- Once again Craig Sager kicks off the TBS broadcast by proving just how useless he is.  So Ron Gardenhire burned his jersey, Carl Pavano campaigned to wear the throwback unis, Denard Span ate steak instead of chicken, and Orlando Hudson's family held some lameass prayer circle before the game?  I.  Don't.  Give.  A fuck!  Tell me about lineup changes, tell me about how they're going to approach Pettitte, tell me something meaningful.  GAH!!

- Amazing turn by Jeter on that double play in the bottom of the 1st.  Throw was a little high, so it was pretty much all arm on the throw after he came down and touched the bag.  His range may not be much anymore, but the old man can still flash some leather.

- Andy didn't look particularly sharp through 2 innings to me.  His fastball was sitting up in the zone and he couldn't locate the cutter and slider exactly how he wanted.  Dave Eiland must have thought the same thing since they both went into the clubhouse to watch some tape after the 2nd.

- Nice play by Swish on that shallow pop up down the right field line in the bottom of the 3rd.  A Top-3 Web Gem for sure.  Although I bet it didn't do his knee any favors having to run that hard and slide on it.

- Joe Girardi and Mo shot a Taco Bell commercial for the new XXL Chalupa??  Why didn't I know about this?  Where was Chad Jennings on covering that story?  I have to say I enjoyed the ad the 2nd time through; very high on the unintentional comedy scale.

- The 4th inning showed the Yankees' true strategy at the plate as they jumped all over Pavano early in the count and started rocketing balls all over the field.  The first time through the lineup it was almost like they didn't have a clear cut strategy, like Joe told everybody "go up there and do whatever you want."  Some guys were swinging early and some guys were taking a strike or 2.  It was as if Joe let everybody do what they felt comfortable doing in trying to gauge Pavano's stuff and what his plan of attack was going to be.  2nd time through the lineup, however, it was swing away.  Pavano was throwing fastball down the middle for strike 1 to everybody and they took advantage.

- That being said, I thought the Yankees were a little TOO aggressive in the 4th.  Granderson hit the double, Teix singled on the first pitch, and A-Rod was swinging first pitch in the next at-bat.  Now he got the run in, but the pitch he hit was outside and would have been a borderline call by the ump.  After 2 consecutive guys mashed fastballs over the heart, Pavano was clearly changing his location with his first pitch and it would have been nice to see A-Rod take a pitch or 2, try to work into a hitter's count, and force Pavano to come back over the middle.  Same thing applies to Cano on his at-bat, even though he singled.

- That strategy of waiting out Pavano is exactly what Berkman did on his homer in the 5th.  Took 2 pitches for balls, worked the count in his favor, and took a hittable pitch and crushed it, going with it to left center.  You can't draw it up any better than that.

- Not to harp too much on the negative, since they did win, but that was a horrible job by Cano in the 6th.  The Yankees just executed a perfect hit-and-run, had runners on the corners, and Pavano teetering on the edge of disaster again.  He was clearly concerned about A-Rod taking 2nd, and Cano needs to be more patient there, take some pitches, and give A-Rod a chance to steal the bag.  Instead he reached on another borderline pitch on the outside and hit a lazy flyball to left, changing the whole complexion of the inning.

- Speed bump for Pettitte in the bottom of the 6th after he cruised through the previous 3 innings.  The slider to Hudson just hung up a little too high and gave him enough chance to put a good swing on it, bad pitch.  But the Delmon Young triple was on home plate umpire Hunter Wendelstedt, who squeezed Pettitte on 2 pitches on the corner, and then 2-0 he had no choice but to throw one for a strike.  Young knew it was coming and did what good hitters do.

- But what Hunter Wendelstedt taketh away, he also giveth.  It was a hell of a swing on a pretty good pitch, but let's be honest, the previous pitch to Berkman in the top of the 7th before his RBI double was strike 3, no doubt about it.  I don't blame Maddon for being pissed and getting run because that was blatant.  That one call set the Yankees up for the rest of the inning, and they took advantage.

- Danny Valencia certainly didn't help his pitcher out after the double in the 7th, making 2 bad plays at 3rd on bunts by Gardner and Granderson.  On Gardner's he wasn't in enough early to make a play on the ball and on Granderson's he was caught in no man's land and wasn't at 3rd to field a potential throw and force play from Jose Mijares.  Kudos to Ron Darling for calling him out on that too.  Good to know he can talk about more than just pitching.

- If you would have told me that A-Rod and Cano wouldn't have been able to drive in one run between the 2 of them with 2 at-bats with the bases loaded before the game started, I would have said you were crazy.  Hats off to Jon Rauch for sitting them down, but another shitty swing from Cano on his pop out.

- After the Yanks got him the lead back in the top of the inning, huge shutdown innings in the bottom half by Andy, going K, foul out, K on Cuddyer, Kubel, and Valencia.  That was the inning they needed and was a great way to end a great outing by Andy.

- Speaking of great, how nasty was Kerry Wood in the 8th??  He struck out J.J. Hardy on a fastball, slider, curve combo, got ahead of Span before retiring him on a weak grounder back to the pitcher on a 95-MPH heater, then K'd Hudson with 3 consecutive fastballs, each filthier than the one before it.  10 pitches, 9 strikes, 3 outs.  I was tweaking my nipples by the time the inning was over.

- After smacking Pavano around the park to get the lead, the Yanks turned to their version of small ball to get an insurance run in the 9th.  Gardner leads off with a single, moves to 2nd on Jeter's groundout, steals 3rd, and comes home on an RBI bloop single by Granderson, who had a patient at-bat that allowed Gardner to time up Matt Capps and steal the base.  When they can combine that with their power, the Yanks are tough to beat.

- Mo was Mo again in the 9th.  Good zip on the fastball/cutter and pinpoint location.  All memories of his September struggles can be forgotten now.

- It was a cat-and-mouse game between the Yankee lineup and Pavano all night.  They were cautiously aggressive first time through the lineup to gauge what he was going, then pounded him early in the count the 2nd time through once they realized he was throwing meatballs to get ahead in the count.  That forced Pavano to change his approach and try to pick corners instead of throwing fastball down the middle for strike one, so the Yankees adapted and went back to taking a pitch or 2, hence Posada's leadoff walk in the 7th and all the subsequent damage that followed on what were some of the longest Yankee at-bats of the night.  It was a brilliant strategy by New York and made life tough for Pavano.  Without swing-and-miss stuff you're going to be in trouble against this lineup.

- On the other side of the pitching matchup, it was like a trip down memory lane watching Andy work.  Whatever he and Eiland watched and discussed after the 2nd inning certainly helped because he was much sharper after that.  He got his fastball down in the zone, started working the cutter and slider to both sides of the plate, using the slider as his out pitch on a couple big strikeouts, and pitched his best inning in the shutdown bottom of the 7th after the Yankee offense regained the lead for him.  Anybody still have questions about the Yankee rotation depth now??

- Last note and it is worth mentioning.  Hunter Wendelstedt was awful behind the plate last night.  He wasn't calling anything on the inside corner and there were probably 10-12 pitches between both teams that were obvious strikes, and his outside corner seemed to stretch somewhere near the on-deck circle to both righties and lefties.  He was consistent, I'll give him that, but consistently bad isn't necessarily a good thing.  There were a handful of times where his shitty strike zone drastically changed how pitchers pitched and that's not something you want to see.

Play of The Game: Berkman's RBI Double in the 7th

It came right after the Twins tied it up in the bottom of the 6th, giving the Yankees the lead back and setting them up for a big inning.  It also took the re-awakened crowd right back out of the game.  Just a crushing blow to the Twins, especially when you consider the circumstances preceding that hit.

Player of The Game: Andy Pettitte

As much as I'd like to give it to Berkman or Granderson (who was awesome), Pettitte's outing was too good to ignore.  7 IP, 5 H, 1 BB, 2 ER, 4 K on just 88 pitches.  He threw first-pitch strikes to 15 of the 26 batters he faced, and that ratio was probably better from the 3rd inning on.  He answered all the questions people had about him and the Yankee rotation moving forward.