2011 ALDS Review: The Things That Were Supposed To Decide The Series

So how'd I do with my series preview/prediction?  Pretty shitty actually.

You can say that the Yankees held the advantage in this department in the series, but it really didn't translate into anything.  Curtis' amazing catches in Game 4 were part of it, but other than that there wasn't much.  An extra base here and there and maybe Russell Martin's slide into home, but the Yankees never got the running game going on the basepaths, and the Tigers never really did anything in the field or running the bases to exploit themselves.  They played errorless baseball and didn't run themselves out of anything.  So while the Yankees probably made more athletic plays, it ended up being a wash in terms of predicting outcome.

I was all prepared to point out how Detroit won the one game that Cabrera did anything in and got their dicks smashed in 3 out of the other 4 when he did nothing, thereby proving that he was the key and cementing my status as a baseball genius, but then the whole "Yankees can't a get hit when they need it" thing happened last night and well, yeah.

But the Yankees did do a good job of limiting Cabrera in the series.  The only game he had a hit in was Game 2.  For the rest of the series he was a combined 0-11 with 4Ks and 0 RBI.  They walked him when they had to, and pitched to him effectively to get him outs when the situation allowed them to.  Cabrera almost single-handedly won Game 2 for the Tigers, but was useless in the rest of the games.  Once again, the Yankees did something that was a key in helping them win but still didn't get the positive result.

AGAIN things should stack up in the Yankees' favor here when you look at the numbers:

It doesn't get much more one-sided than that, folks.  The Yankees beat down every single one of the Albuquerque-Benoit-Valverde troika at one point or another, mostly Albuquerque.  And they looked like they were fixing to do it to Benoit again last night.  On the other side, save for the one bad pitch that Soriano made to Delmon Young in Game 3, the Yankees' big bullpen arms shut the Tigers down.  Unfortunately, D-Rob and Mo only combined for 3.1 of the total innings, so the advantage in performance couldn't be played into victory.

Essentially, my predictions were right on the money in that the Yankees dominated the 3 keys I identified, and completely off in that none of it ended up meaning a goddamn thing.  That was the most frustrating thing about this series.  Everything points to the Yankees being the winners, and they still managed to lose.  Just mind-bottling. 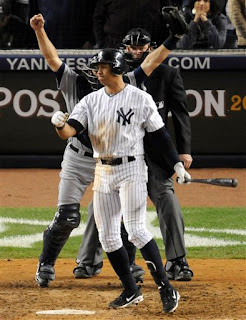 (The end.  Courtesy of The AP)
Having to write this with a defeat hangover is infinitely worse than with a victory hangover.

- TBS opened their pregame 7-minute time waster with John Smoltz saying the Yankee bullpen was "equally better" than Detroit's.  As little sense as that makes, it actually makes perfect sense.

- As shocking as the back-to-back HRs allowed by Nova in the 1st was, I really didn't think much of it.  He hung 2 bad offspeed pitches (Kelly's HR was actually more about Kelly putting a good swing on it), but didn't lose his rhythm or command.  The only frustrating part was it being Don Kelly who did the damage.  That guy got voted to the "Jeff Mathis Memorial Shitty Players Who Inexplicably Own The Yankees" Hall of Fame last night.

- While I wasn't throwing in the towel at 2-0, I'd be lying if I said Nova was on.  Even the slider that he struck Cabrera out with was way up in the zone.

- Darling got on his knees early for the Tigers, praising them for being "loose" enough to hit the 2 1st-inning HRs.  It was only the 2nd inning and for the first time in the series the TBS guys were pissing me off.  Bad sign.

- I thought Nova looked better getting out of trouble in the 2nd inning after a leadoff double by Ordonez.  His offspeed stuff was starting to sit a little lower in the zone and he found his command out of the stretch.  It looked like it was going to be another solid outing for him.

- Shockingly, though, Joe quick-hooked Nova after 2 and we were all left to sit and say "what the fuck?!?!"  I'll talk about the arm tightness later.  At the time, I thought Joe was just getting antsy and trying to shorten the game up, which I thought was unfair to Nova, who should have earned a longer leash with the way he'd pitched the last couple months, but it also wasn't a horrible decision considering how well rested his hosses in the bullpen were.

- I counted no less than 6 times that Doug Fister got a generous strike call on the corner in the first 2 innings, and at least 3 times that Yankee hitters had something to say to Tom Barrett about it.  Barrett was consistently wide for Fister all night (gross) and that was a contributing factor to his early success.

- That being said, Fister did pitch very well through the first 3 innings.  He was getting ahead in the count, mixing his pitches well, and working both sides of the plate, something he failed to do well in Game 1.  Getting Cano to end the 3rd inning with a couple runners on was a big out, especially after getting down 2-0 to start the at-bat.

- I wouldn't quite call it "quiet," but Brett Gardner's excellence at the plate flew a bit below the radar in this series.  He seemed to get all his hits in timely situations and seemed to get all of them with either 2 strikes on him or 2 outs in the inning.  He didn't try to do too much with anything thrown to him and didn't swing too hard like he tends to do in tight situations.  The #9 hitter being the best one on the team, who woulda thunk it?

- After watching him keep his short leash on Phil Hughes (who was awesome) to go to Logan in the 4th, I thought I knew what Joe was doing.  He was playing the matchups and working the game in reverse to use his best bullpen guys for 5 innings.  Soriano 5, D-Rob 6-7, and Mo 8-9.  I thought it actually made perfect sense and I felt better about him yanking Nova early.

- Unfortunately, Joe had to screw that plan up and bring in CC for the 5th.  Why, why, WHY???  CC being available was the right call, but he should have been saved for emergency situations or extra innings.  Assuming you're going to come back and score some runs, if you're Joe you should stick with your regular bullpen guys.  They're used to coming out in those situations and more rested than CC and you'd also like to have CC lined up to pitch Game 1 of the ALCS.  But whatever, Joe mangled everything else in this series, why should that have been any different?

- Smart baserunning play by A-Rod in the 4th to pick up Rob Thompson at 3rd (he would have been out by a mile), great at-bat by Jorge to get a hit to load the bases after falling behind Fister 0-2, and an absolute horseshit at-bat by Russell Martin, failing to get a run in on his 1-1 pop up.

- Strikeouts aside, I didn't think CC was fooling anybody with his stuff last night.  A lot of fastballs were fouled straight back and the Tiger hitters seemed to know what pitch he was going to throw in certain situations.  The 3rd run he allowed off the bat of Victor Martinez turned out to be a huge run, and it could have been avoided if Joe kept him in the 'pen and stuck with his bullpen guys.

- Celeb sightings on TV- Jay-Z and Spike Lee, both being caught clapping and yelling maniacally after big outs.  Good to see that those guys are just like us regular fans.  Except for the hundreds of millions of dollars, dozens of different business ventures, legendary rap career, Grammy Award-winning wife, and undeniable swag, there's really no difference between Jay-Z and myself.

- Cano was all over that pitch that Fister hung in the 5th to get the Yankees on the board.  It looked like a cutter that drifted back out over the heart of the dish instead of cutting in and Cano wrecked it into the rightfield seats.  The guy should never hit anywhere but 3rd in the order for the rest of his life.

- TBS tried to justify Barrett's shitty strike zone for the third time in the top of the 6th, talking about approximations and camera angles and where the pitch crosses the plate.  Fuck you, guys.  The strike zone was bullshittingly wide for Tiger pitching, tight for the Yankees on the corners, and you know it.  Take your Cabrera jerseys off and be objective!

- Biggest example of the big fella not being all there last night was the walk to Peralta in the top of the 6th.  You can't be 2-2 on the 8 hitter with 1 out and lose the guy to a walk.  In a game like that, with the bottom of the order up, you have to throw strikes and CC couldn't do it.

- Luckily, Soriano came in and got a HUGE double play off the bat of Ramon Santiago.  That moment felt like the point when the lineup would wake up and start hitting.  It just felt like it had to be.

- For the 2nd time in the series, I sat on my couch and wondered if Joe should have pinch ran Dickerson for Jorge after his base hit in the bottom of the 6th.  It ended up not mattering with Martin K'ing, but at the time I thought giving Dickerson a chance to steal 2nd and score on a single was better than hoping Jorge didn't fuck anything up on the basepaths.

- I'll give some props to Soriano, he was dirty in his last 2 outings.  The home run to Young in Game 3 was still bullshit, but he came up big in the last 2 games when Joe needed him to.

- Who the fuck was the clown they got to sing "God Bless America" last night???  Dude sounded like me singing in the shower.  Where the hell was Mary Kay Messenger?  Chick practically had me in tears in Game 1.  Bad form, Yankees.  Bad form.

- Joe coming out to get the Band-Aid removed from Joaquin Benoit's face was the best bullpen-related move he made all series.

- Darling on an A-Rod foul ball during his at-bat in the bottom of the 7th- "that's the best swing he's had all series."  OK, Ron.  Clearly you missed the 2 he had in the 8th inning of Game 4 when he ACTUALLY GOT FUCKING HITS!!!!  In a related story, the walk that Teix took was probably the best thing that could have happened in that situation, since any time he does swing the bat nothing good happens.