D-Rob's Road To Recovery A Smooth One 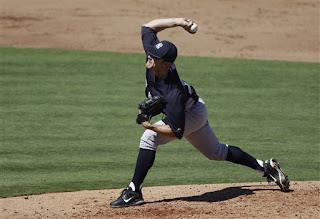 D-Rob threw his first bullpen session today after suffering the bone bruise in his foot.  25 pitches, no pain in the foot, and he's looking at roughly another week before he's back out on the mound pitching in a game.  That should give the Yankees plenty of time to work him into a few games to find his command again, and barring a major setback or another injury all signs point to him being ready for Opening Day.

Good news for the Yankees, not so much for other guys who might have had a chance to make the team with an extra bullpen spot open.  Although with Freddy's bruised hand there's still a small chance that guys like Phelps, Mitchell, or Betances make the team.  They weren't sent down to MiL camp with the first round of cuts and have certainly earned the opportunity to show Joe and the coaching staff a little more of what they can do.  But at the end of the day, the Yankees should have their setup man and arguably best relief pitcher ready and healthy for Opening Day, and that's the most important thing.
Posted by Unknown at 4:59 PM No comments: