I'm a little late on this breaking story (damn internet was down at the apartment), but via Marc Carig, the bad injury luck continues for the Yankees as Brett Gardner has suffered a setback in his rehab from his right elbow strain.

Apparently there was some soreness and swelling after he played in the Triple-A game last night, which would explain why Gardner wasn't activated today, and he's probably getting an MRI as we speak.  As usual, I'll update this story as more details become available.

I'm really at a loss here.  When is this injury madness going to stop?  I can't take it.

** UPDATE- 6:46AM- According to Joe's postgame presser last night, Gardner re-aggravated the strain in his elbow that put him on the DL in the first place.  The plan is to shut him down for 10 days and see where he's at then, but Gardner will likely be out longer than that.  Dewayne Wise looks like he's going to stick around for a while. **
Posted by Unknown at 5:36 PM No comments:

Shuffling The 25-Man Deck To Make Room For Roster Reinforcements

Had to post that clip.  Too funny not to.

But on a more serious note, the Yankees are going to get a shot in the arm over the next handful of days with regards to their 25-man roster.  They are finally starting to get healthy, with Brett Gardner and Eric Chavez both scheduled to come off the DL either today or tomorrow, and some guy named Andy Pettitte is going to be added to the starting rotation on Sunday.  There's been a recent burst of roster shuffling activity to cover for the injuries to Chavez, Mo, and Swish's missed time, and the shuffling will continue this weekend.

Looking at the active roster, it's pretty clear who the 3 targets for 25-man termination are.  Cody Eppley, who was recalled last week to replace D.J. Mitchell in the bullpen, should get the boot from his low-leverage mop-up spot when David Phelps gets knocked back to the bullpen to make room for Andy.  In the field, Jayson Nix and Dewayne Wise will likely get axed for Gardner and Chavez.  It will be a shame to lose Wise, who doesn't have any options and would have to clear waivers before the Yankees could try to stash him in Triple-A again.  He has hit incredibly well since Spring Training and can play all 3 OF positions better than anybody else left on the Yankee bench, but there just isn't any way that he's getting the nod over the Joneses and Ibanezes of the world.

The Yankee roster has never been the complete 25-man version it was expected to be at the opening of spring camp, and it never will be with a few guys out for the season.  But with the return of Chavez, Gardner, and Pettitte, it will become deeper and have more depth of talent than it has in the past few weeks.
Posted by Unknown at 2:06 PM No comments:

A while back, I wrote a piece that examined Curtis Granderson's statistical profile for the 2011 season and attempted to predict the likelihood of him maintaining that MVP-caliber level of production moving forward.  My expectation was that he would likely see a regression in his career-high HR numbers, but could still produce at a high level in 2012 with a more selective approach at the plate and a spike in his LD rate to supplement the dip in power.  We're a little over a month into the 2012 season and C-Grand's numbers so far are better across the board than they were last year.  He's currently hitting .274/.370/.581, with a .396 wOBA, 152 wRC+, and ISO and BABIP numbers both north of their 2011 values.  Of his 32 hits thus far, 15 of them have been for extra bases, including 10 home runs.  Granderson started to heat up towards the end of ST and hasn't cooled down since.  He's picked up right where he left off at the end of 2011 and has yet to show any signs of slowing down. 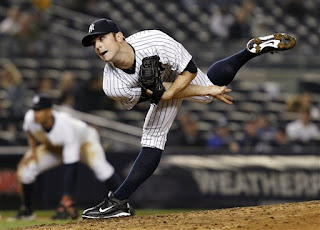