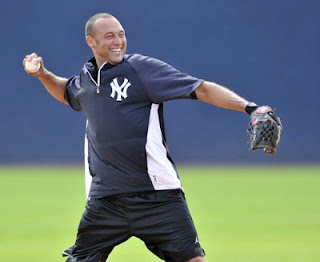 Transitioning From Trends To Storylines

We've been at this Spring Training thing for long enough now that it's time to start looking ahead towards the 2013 season.  Opening Day is three weeks from tomorrow, so as a way to begin the transition into the 2013 AB4AR Season Preview series (and also because I'm hanging like a bastard today) I wanted to bring back the 2012 Statistical Trends to give everyone an idea of what some of the key talking points will be during the next three weeks of season previews.

- Robinson Cano's 2012 Struggles Against LHP- Was it just a one-year fluke or the start of something more serious?

- Ivan Nova's XBH Allowed- I've linked to this one before.  It's all about fastball command for Nova.

- Joba's Return to the Mound- Once he got his slider going, things started to come together.

- Curtis Granderson's Strikeouts- Just imagine how many HR he could hit if he learned how to lay off sliders out of the zone.

- Derek Jeter's Bounce Back Season- Was it just BABIP luck or did Jeter really defy time and regression?

- Phil Hughes' HR Allowed- Just because it's a fastball count doesn't mean you have to throw one.

Study up, kids.  I'll give you a minute.