The Picture Starts To Become A Lot More Clear

Some comments from Cash on the status of Andy Pettitte today:

"I don't think he's determined if he's officially finished or not, but he's chosen at this stage at least not to start in 2011.  If that ever changes he'll call us. We're not going to hound him or bother him.  Andy's been very communicative on these issues and right now he's not in play, and if he does decide to play he'll play for us. "He's a Yankee from start to finish." (courtesy of the NY Daily News)

Well there you have it, folks.  It sounds like Andy may very well be done.  Cash may be trying to leave the door open here if Andy hasn't officially come out and said he's retired.  But if the guy isn't planning on starting the 2011 season (which means he hasn't started working out), then I think it's a safe bet that nothing is going to kick in once the season starts that will inspire him to start working out and come back some time in the mid- to late summer.

Call me naive, but in the back of my mind I still held this small glimmer of hope that Andy would wake up one morning after having some Yankee-related dream and realize he still had a little bit of an itch to play, enough of an itch that it would have been worth it to him to scratch it by playing one more year in 2011.

But if this is really it.  If he is really done, then I'm OK with his decision and every other Yankee fan should be too.  This man has given everything he's had to this organization, from the time they drafted him in 1991 to the time he stepped on the mound in Game 3 of the 2010 ALCS.  I could give a shit less about the years he spent with the Astros, Andy Pettitte has always been and will always be a Yankee.  Say what you want about the steroids, there is no denying that Andy Pettitte was a gamer, an ideal teammate, a professional, and a great Yankee.
Posted by Unknown at 9:04 PM No comments: 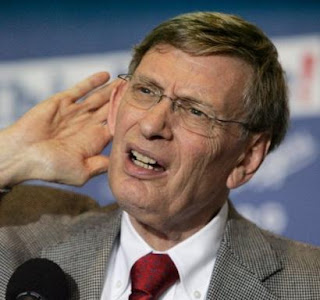 (Yes, Bud.  I'm actually going to heap a little bit of praise on you)
Any baseball fan knows that Bud Selig rarely ever says or does anything right, so the story in this link shouldn't come as a complete surprise.  Long story short, MLB has announced that they have no plans to expand the playoffs in 2011 and also have no plans to expand instant replay in 2011.

First the good part.  Good call on not expanding the playoffs, Bud.  3 division winners and 1 wild card is plenty and the rewards given to the division winners and competition inspired by the 1 wild card spot often make for entertaining baseball down the stretch, even if division titles are already locked up.  Adding more teams and more rounds to the postseason would be incredibly stupid.  For one, the baseball playoffs take too goddamn long as it is.  Sure, it helps teams like the Yankees stagger their best pitchers to avoid throwing A.J. Burnett out there at all costs, but it also creates no sense of flow, momentum, or drama to a series, even a good one.

Secondly, adding more teams serves only to reward mediocrity and lessen the competition and level of play down the stretch while punishing the division winners who would end up getting a first-round bye.  Baseball is not a sport where byes are as beneficial to success as they are in other sports.  Batters lose their timing sitting around for 7-10 days and pitchers can lose their feel for their stuff.  A division winner would be starting from scratch again in the 2nd round against a team that has just come off playing a series and still has their timing down.

If a supposed expansion plan of adding 2 teams to each league would have taken place last season, we would have had the Red Sox, White Sox, Cardinals, and Padres all playing in the first round.  Those teams deserved to be in the playoffs last year about as much as I deserve a nomination for "VH1 Hip Hip Honors."  Injuries or bad luck or whatever the fuck it was, those teams didn't win as many games as the other teams in their division and their league and they don't deserve to be rewarded for that (as much as MLB would love to have a way to shoehorn Boston into every postseason).  So kudos to MLB for not going this route for 2011.

On the other side of the coin, how the hell can MLB still insist of not expanding instant replay, even after another regular season and postseason of completely horrific umpiring?  You had missed home runs, missed fair/foul calls, and missed safe/out calls that could have very well changed the outcome of postseason games and you had poor Armando Galarraga getting fucked out of a perfect game because Jim Joyce is a moron.  Shit like this cannot be accepted as part of the game anymore!

When it comes to replay, baseball has the simplest, most black-and-white set of rules and calls to monitor.  There wouldn't need to be long delays and minutes of reviewing every angle of a play to determine fair or foul, safe or out, or home run or not home run.  10 seconds at the most would be all it would take to get the call right and ensure that the game plays out the way it is supposed to.  Umpires are human, they make mistakes, and that's OK.  Refs do it in the NFL, refs do it in the NBA, and refs do it in the NHL.  And guess what?  All 3 of those leagues have instant replay to make sure that human error doesn't affect the outcome of the game.  It's really quite simple:  every play, short of balls and strikes, should be open to instant replay and review in baseball, and until that is put into effect, MLB is going to continue to see games being affected and calls being made from everybody to expand.

So Bud, can you hear me, Bud?  Can you?  Take a clue from everybody else and expand the fucking replay rules.  It ain't that hard and it will make everyone's lives a little easier.  Players and managers will be happy, fans will be happy, and umpires won't have to sit in front of the media after they fuck up and dance around questions uncomfortably when they get grilled about fucking up.
Posted by Unknown at 3:13 PM No comments:

"Pretty much every scouting report you’ll ever read about Graham Stoneburner suggests his ultimate role could be as a reliever rather than a starter. The Yankees, though, will continue to use Stoneburner out of the rotation, and they believe that he could remain a starter if his changeup continues to develop. Stoneburner had a 2.41 ERA between Tampa and Charleston last season, and the Yankees won’t change his role until he pitches himself out of the rotation."

I'm already on the record as a huge Stoneburner fan and could really care less where he ends up pitching as long it's in pinstripes.  But the fact that the dude has arguably the coolest name ever makes me think that he could fit in better as a reliever.  I mean, "Graham Stoneburner."  That name screams closer.  It's the coolest closer name since The Duke in "Major League, " and that guy led the league in K/9 and hit batsmen.  And threw at his kid in a father-son game!  Pretty damn impressive if you ask me.

So if Stoneburner ends up becoming the closer of the future instead of a part of the rotation, that works for me.  He's already suited for it from a name perspective.  All we need to do now is figure out what his entrance music would be.  Do you focus on the "Stone-" aspect of his name or the "-Burner?"  What do you think?

(Just more awesome AB4AR-style analysis.  Scouting reports and secondary pitches be damned.  This kid has a cool name and that makes him a good closer prospect.  Beat that logic, Tim Kurkjian!)
Posted by Unknown at 10:23 AM No comments: