Truth be told, there's a small part of me that's glad the Yankees' season is over and glad that the inevitable didn't get delayed for one more game last night.  I've been a walking zombie for the better part of the last 3-4 weeks with all that's been going on in my life, and the really late nights and really early mornings of writing weren't helping.  And then there's the whole part where my apartment has devolved into the first stage of a future episode of "Hoarders."  I've got assorted empty beer containers everywhere, pizza boxes everywhere, piles of mail sitting around, a bathroom that I'm almost afraid to go into because it's so gross, and a litany of other chores and assorted daily tasks that normal human beings keep up with regularly that have been dying on the back burner for the last month.  So at least now that I don't have to stay up late drinking, cursing, writing, and getting 4 hours of angry sleep I have the opportunity to get reacquainted with the rest of my life.  That's a good thing, I think.  Now onto the links!

- On Monday, Michael P. of Yankees Fans Unite expressed a passionate take on the first 2 games of the ALCS.  I remember being that pissed after Game 2 too, so I can relate.

- EJ Fagan of TYA had a slightly more positive take on the first 2 games of the ALCS, commenting on the nature of being a Yankee fan and a offering a reminder to be happy that they made the playoffs again and passionate even if they lose.

- On Tuesday, Mike Axisa of RAB, almost always the voice of reason with the 'pen, reiterated the importance of Joe leaning on his best relievers in the ALCS.  Whoops, guess that didn't happen!

- William Tasker of IIATMS listed the reasons Nick Swisher won't be back next season, and the unfortunate role his postseason struggles are playing in making his departure more likely.

- On Wednesday, Marc Normandin of Pinstriped Bible rehashed Phil Hughes' checkered injury history and the role it may be playing in his Major League failure to live up to his Minor League hype.

- SJK of NoMaas was convinced that Joe benching A-Rod for Games 3 and 4 of the ALCS was a personal decision and not a baseball one.

- Alex Pugliese of Yanks Go Yard used the lessons currently being learned from the A-Rod contract as a foundation for an argument against re-signing Robbie Cano to a big deal.

- William Juliano of The Captain's Blog compared the shenanigans that sprung up in this year's postseason to the old Bronx Zoo teams of the 70s, ultimately concluding that they were still nowhere close to Billy's boys.

- On Thursday, Steve Lombardi of Was Watching asked, when the rumor mill was really swirling, if the Alex Rodriguez Era in pinstripes was worth it.  Even if he doesn't get traded, which he won't, that's a question that is still worth asking.

- Jamie Insalaco of Bomber Banter took a more clever approach than I in pointing out the ridiculousness of the A-Rod media storm this week.

- Bryan Van Dusen of The Greedy Pinstripes attempted to put a bit of a positive spin on the ALCS sweep by pointing out that the Tiger bats didn't exactly blow the Yankees' doors off.  A small consolation to such a one-sided series outcome.

- On Friday, Alphonso of It Is High... weighed in with his personal choices for who should stay and who should go for next season.

- Chad Jennings of LoHud discussed the Yankees' postseason shortcomings and had some statements from Brian Cashman regarding the direction the Yanks will take this coming offseason.

For this week's Friday Jam I'm going with "Rays On Pinion" by Baroness.  This song has such a quietly kickass intro.  It came on my iPod the other night when I was driving home and it made me feel like I was acting out some kind of opening scene of an action movie.  An action movie starring me driving around in a green Honda CR-V, pretty sure nobody would watch that.  Whatever, this song still kicks ass. 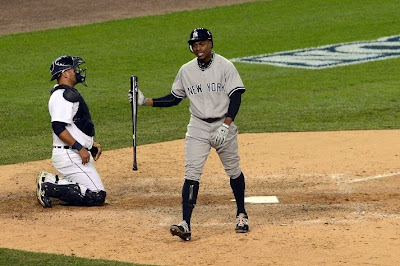 A long while back in the summer of 2011 I wrote a short post gloating about the outcome of the '09 3-team trade that netted the Yankees Curtis Granderson.  At the time, Jackson was struggling through a tough second season in the big leagues and Granderson was one of the top offensive players in baseball.  That post, short as it was, is one of the top 10 most viewed posts in AB4AR history, and if you scroll down far enough on the page to see the "Greatest Hits" section, you'll still see it there, in all its glory.  It's one of the most popular posts I've written, and I imagine it's only going to get more popular now that I've used this post to out my stupidity in writing that one.  After last night, there's no doubt who the winner and loser of that trade really was.
Read more »
Posted by Unknown at 10:30 AM No comments: 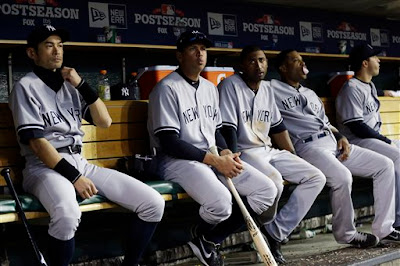 I hate to ever bring up effort in a discussion about a professional sporting event; I always assume that these guys are out there giving it everything they have.  But that Yankee team on the field last night didn't look like a group of guys who even wanted to be there.  The Yankees laid down and died in Game 4, and they probably would have been better off not even showing up.
Read more »
Posted by Unknown at 6:00 AM No comments: