The Yankees aren't going to be participating in the postseason this year.  It's only the second time we've been able to say that since 1994, and with the type of baseball we watched them play for the majority of the season it's probably for the best that they're on the outside looking in.  I've gotten so used to doing the end-of-year debate about the playoff roster that it's strange to not have to think about that this year.  Chances are the Yankees wouldn't get very far in the playoffs regardless of what 25 guys they took, but trying to predict the playoff roster is usually one of the more fun exercises of the year.  In the interest of trying to have a little fun, here's what my hypothetical 25-man playoff roster would look like.

Some Final Statistical Perspective On The Yankees' Season

The Yankees finished up their 2013 season with a series sweep of the god-awful Houston Astros this past weekend.  Those 3 wins gave them an 85-77 final record, expected when you consider where a lot of the preseason projections had them and somewhat surprising when you consider their -21 run differential.  That figure painted the Yankees as a sub-.500 team, 79-83 according to the Pythagorean W-L projections, and it's worth noting that the Yankees were the only team in MLB with a negative run differential that finished above .500 on the season.

There was no return of mystique and aura to carry this old, extremely flawed ballclub to the postseason.  There was no last magical run for Andy and Mo.  There was just a crummy baseball team that somehow slightly outperformed its mediocre statistical expectations.  If you need further proof of that, here it is in a nutshell.

No Mo This Weekend Was The Right Thing To Do 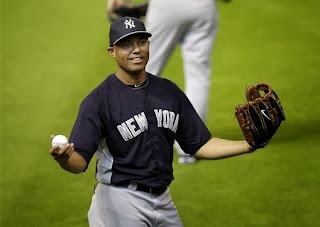 Along with Andy making his final career start in front of his second home fans, the only other source of buzz to this weekend's season-concluding series in Houston was what else Mariano Rivera had in store for a goodbye.  Would he pitch?  Would he play the outfield?  How much would Joe let him pitch if he was going to play the outfield?  Turns out the answer to all those questions was either "no" or "none".  After Joe said he was letting Mo call his own shots for the series, Mo ended up not pitching or playing at all in the final 3 games, citing arm soreness and general fatigue and a desire to respect the game and not play when he wasn't at his best.

You may have noticed the site wasn't very active this past weekend.  That's partially due to the fact that I spent Saturday picking winners and making money hand over fist at Arlington Park in Chicago and mostly due to the fact that the season was already over and I didn't see the point in analyzing or reporting on stuff that didn't matter anymore. But now that one season is over, another can begin.  It's time for another Yankee offseason and here's the rough plan for what you can expect from AB4AR in the next 4+ months.

We'll start off this week with some random recap stuff and the AB4AR year end awards posts later in the week, then transition right into the 3-week 2013 season recap next week.  The format of the 3 weeks will be the same as it was for the season preview: 1st week will be the "2013 Storylines" follow-ups, 2nd will be the "What We Thought We Knew & What We Learned" to bridge the gap between 2013 and 2014, and the last week will be the "2013 Season Review" posts by roster group (lineup, rotation, bullpen, bench).

After everything is put to bed on 2013, we'll start diving into the hot stove stuff.  I'd like to do more trade and free agent target profile pieces, since the Yankees are going to have to get creative with both to have any hope of being competitive next year on a budget, and there will be plenty of posts devoted to that budget and payroll breakdown as well.  There will also be plenty of prospect talk, including AB4AR Prospect Week and the release of the 2014 AB4AR Top 30 sometime in January, and maybe another post or 2 devoted to at-bat/closer entrance music.

Baseball season never really ends at AB4AR, so get ready to re-live all the not fun and non-excitement of the 2013 season over the next few weeks.  If you want to refresh on the season preview topics before next week, you can get a head start by revisiting the "2013 Storylines" series here.