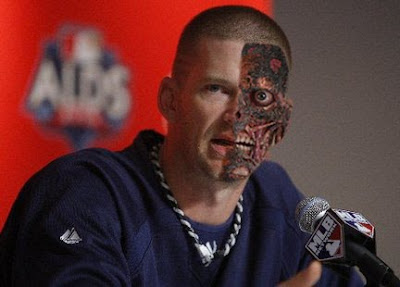 It was only a matter of time before bad A.J. reared his ugly head and last night was that time. He couldn't locate the fastball or the curve and had already been living on the edge before blowing up for good in the 3rd inning. And now cue the sounds of all the NY sports writers firing up their laptops to point out how awful A.J. has been in Boston since joining the Yankees and horrible it was that they got crushed last night in the series finale.

The reality of the situation is the Yankees still dominated Boston to the tune of 24-6 in the first 2 games of the series and they leave Boston with another series win in hand. With the number of injuries they came into Fenway with and the couple more they added over the weekend (Johnson, Aceves, maybe Cano), I think they will take that series win, bad A.J. outing or no bad A.J. outing.

So A.J. sucked yesterday, big deal. Anybody who actually expected him to keep up the pace he had set all year long and not have any of these "bad A.J." outings just doesn't know A.J. and doesn't know baseball. He's still 4-1 with a 3.40 ERA on the season and the Yankees are still 21-9. So enjoy the victory, Boston, and enjoy being back at .500. The Bombers have bigger fish to fry, like that punk Johnny Damon and the Tigers starting today.
Posted by Unknown at 7:05 AM No comments: