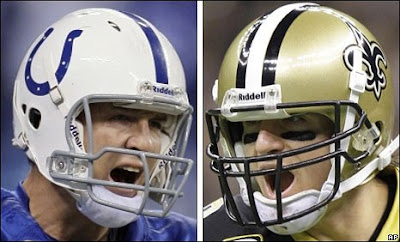 And so it all comes down to this, Peyton and the Colts against Big Drew and the Who Dat Crew for the right to wear ugly t-shirts and hats and call themselves champions. Before we get to the breakdown of the game and the pick, here's a word from Al Pacino:

Thanks, Al. Now to the game.

By now everybody knows enough about Dwight Freeney's injured ankle to write a book about it, but what people don't know is whether or not he's going to play, if he does, how many plays is he going to be, and how effective is he going to be on that broken wheel. Despite what the Colts say, the Saints have to be preparing as if Freeney is going to be on the field; that means having blocking schemes set up to chip him with tight ends, pick him up with RBs, and make sure he is accounted for on every single play. If he doesn't go, then everything becomes a little easier for New Orleans, but they still have to prepare for the worst.

Robert Mathis is a good player, but he's more Pippen to Freeney's Jordan than a Jordan-type himself. Mathis thrives on the attention that other teams pay to Freeney and it isn't going to be as simple as swapping him to Freeney's side of the line if Dwight can't go and letting him have a field day. If Freeney can't go, or is severely limited in playing time and effectiveness by the injury, then the Colts are going to have to get creative to get pressure on Drew Brees. We're talking stunts, bringing LBs and defensive backs on blitzes, and disguising it well enough so that Brees doesn't sniff it out at the line and pick them apart with audibles and hot routes. The Colts LBs and secondary have been praised all year for their team speed and ability to stand up to the opponents' skill position players but we're not talking Derrick Mason, Mark Clayton, and Jerricho Cotchery here. We're talking wave after wave of Marques Colston, Devery Henderson, Robert Meachem, Lance Moore, Jeremy Shockey, and Reggie Bush coming at you from all angles and spreading and stretching the field, trying to exploit the weak spot in the coverage. This game will be the truest test of just how good Indy's secondary is or isn't.

On the other side of the ball, New Orleans has made no secret about its gameplan: hit Peyton Manning at all costs. That strategy worked pretty well against Minnesota, as the beating he took over 4 quarters almost certainly had something to do with Brett Favre's bonehead decision at the end of the game. But don't forget that before that ill-fated throw across the middle, Favre had spent the better part of the game carving up the Saints secondary, something that Manning, more than anybody else in football, can do with ease. If Jabari Greer and Tracy Porter can't cover Bernard Berrian, I can't imagine them shutting down Reggie Wayne one-on-one, and if the Saints commit 2 guys to Wayne, then this game could turn into another episode of "The Pierre Garcon Show."

One thing to look for by the Colts could be an early commitment to the running game. Knowing what the Saints are going to look to do, the Colts could flip the script and keep the ball on the ground more with delays and draws to try to use the Saints' aggression against them. Sure they were the worst rushing team statistically in the league this year, but in Joe Addai and Donald Brown, the Colts have 2 guys who can get the job done. With the Saints going balls to the wall for Manning, an early dose of draws and short screen passes could be just what the doctor ordered to negate the New Orleans pass rush and force them to respect the running game, which will make life that much easier for Manning once they do decide to start chucking the pill.

An X-factor for the Colts is going to be Antoine Bethea. Bethea is going to have a plethora of responsibilities: stepping up to stuff the run against Pierre Thomas, covering Dallas Clark in spread formations, shadowing Bush out of the backfield, and providing help over the top to the Saints corners. The more positive plays he is involved in, be it through tackles, tipped or broken up passes, blitzes, and forced turnovers, the less time New Orleans is going to spend on the field and the better of the Colts are going to be.

For the Saints, the X-factor, as usual, is going to be Reggie Bush. I thought this was going to be Bush's breakout season but it turned out to be just another up-and-down year that looks more representative of what his career will turn out to be. For every big game Bush has, he has 2 after it in which he is virtually non-existent and for the Saints to win this game, he can't be non-existent. There are going to be a handful of opportunities during the game to get him the ball in space and he needs to take advantage of those opportunities. Bush can't be dropping easy passes or getting taken down by the shoelaces in the open field. If he can break a few big plays, he can force the Colts to devote more attention to him and open up the field for the Saints receivers. But if he shrivels under the spotlight and becomes a non-factor, then the Colts can drop more men into coverage and try to blanket New Orleans' air attack.

While each teams' defense has been the focal point in the weeks leading up the big game, I don't expect either to be overly influential of the game's outcome. Both teams are going to put up points but in the end the Colts will put up more. They are better equipped to handle what New Orleans is going to throw at them with their veteran o-line, good blocking backs, smart receivers, and the best QB in the game, than New Orleans is. The Saints receivers have had the tendency in the past to get cases of the dropsies and I foresee a couple big ones in this game that kill drives for them. The game will be closer than some think, but the Colts will do enough to cover and win.