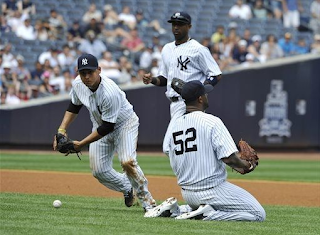 It was an ugly loss on Saturday afternoon, in what's become the new "typical Yankee fashion" of the offense no-showing against mediocre pitching.  The Yanks were looking to rebound today and secure a series victory before the ASB and they had CC Sabathia on the mound to do it.  The chances of that happening ended almost as soon as the game started and the Yankees set a new standard for the term "ugly loss."  Just an absolute disaster out there today, primarily in the field but also at the plate, on the mound, and on the basepaths.  A total and complete shitshow in every way and not the way to end the first half of the season at all.

- CC got the 1st 1-2-3, but he didn't have much life on his 4 or 2-seam fastballs and he started getting knocked around in the 2nd when he gave up 2 runs on a lot of well-hit singles.

- Things really got out of control in the 3rd, however, when CC's defense let him down.  Robinson Cano failed to catch a deep pop-up that turned into a double, Eduardo Nunez airmailed a simple throw to first base with 2 outs, and CC gave up a 3-run homer on the next pitch to make it 5-0 Twins.

- Cano singled home a run in the bottom half of the inning to get the Yanks on the board, and they had a rally going with runners on the corners and 1 out.  Then Zoilo Almonte got thrown out trying to score on a fly ball and the wind was out of the sails.

- More bad CC pitching (2 hits, 2 walks) and more bad defense (Lyle Overbay booting a grounder) led to 3 more Minnesota runs in the 3rd and the white flag basically went up.  CC was done after 4, and the game was basically over.

- Ichiro drove in a few runs with an RBI groundout in the 4th and a solo HR in the 7th, but it was too little too late.  The Yanks dug themselves into a hole too deep for their offense to climb out of.

- Some good bullpen work from Preston Claiborne and Adam Warren behind CC.  Then some more bad work from Joba in his new mop-up role in the 9th.  2 hits and 2 walks in 1 inning ain't gonna build trade value.