Well the big day has finally come.  Today I make my inaugural visit to the new Yankee Stadium.  By the time this post goes up, I'll already be in some state of intoxication and as I explained before, I'm not sure how or how much I'm going to be blogging about this weekend's games/festivities.  We'll see how this first night goes.  In any case, go Yankees and onto the links!

- On Tuesday, William Juliano of The Captain's Blog compared the AL Wild Card contenders' remaining schedules to see who was in the best position and how difficult the Yankees' road will be.

- Brian D. of Yankees Fans Unite mused on what Andy Pettitte's future holds after this season.  Personally I think this will be the final retirement for him and he'll be done for good whenever this season ends.

- Mike Axisa of RAB looked back at a few recent examples of September call-ups who helped the team as the Yankees added a batch of those to the active roster this week.

- On Wednesday, el duque of It Is High... pondered the possibility of Mo or Jeter getting the new postgame Gatorade bath treatment.  I have to agree that it would be pretty cool to see Mo get it.

- Jesse Schindler of Pinstriped Bible looked at how Phil Hughes might fit into the bullpen hierarchy now that he's been removed from the rotation.  Don't expect anything high-leverage.

- Chad Jennings of LoHud had Phil and Joe's thoughts on the move to the bullpen.

- On Thursday, Mike Ashmore of Thunder Thoughts had Game 1 of the ELDS covered from all angles and game 2 was no different.  He's a must-follow for all the Thunder playoff coverage.

- Bryan Van Dusen of The Greedy Pinstripes tossed around the idea of bringing Hughes back as the setup man next year.  Not a bad idea given his relief history, I just don't see any way the team takes him back.

- Nathanial Stotlz of FanGraphs analyzed Jose Campos, his first season back after last year's elbow injury, and what kind of prospect he is now after that injury.

- William Tasker of IIATMS/TYA marveled at how great Mo has been in his final season.

- SJK of NoMaas commented on the team's organizational catching depth now that scouting reports on Gary Sanchez's defense continue to be negative.

- SG of RLYW projected the change in postseason percentages in the AL East based on all possible outcomes of this weekend's series.

For today's jam we're dusting off a classic that I haven't used in a while.  Only seems fitting to bring this one back out when I'm heading to the ballpark.

As I may have mentioned once or twice in the last few weeks, I'll finally be going to the new Stadium this weekend to watch the remainder of this series.  Between going to the games, drinking before, during, and after the games, and then finding a way home after, my opportunities to write about the experience and what happens on the field will be severely limited.  I'd like to say I'll at least be able to squeeze game recaps in, but that will depend heavily on where I end up sleeping each night and what the computer situation is wherever I wake up.

So expect a slow weekend of content here on the blog.  If news is breaking, chances are I won't be covering it until Monday morning.  If I can get something written for any of the next 3 games I will, but I'm not making any promises.  If you've gotten to the point where you can't go that long without your AB4AR fix, just keep coming back and watch this gif of A-Rod's slide into second last night over and over.  That should tie you over.

Kelley Out With Triceps Inflammation

When explaining his decision to go to Joba in the 10th, Joe told the media that Shawn Kelley was unavailable last night due to triceps inflammation.  Apparently he's been feeling something recently and although tests showed no structural damage and he won't be going on the DL, Joe stated that Kelley would be out for the rest of this series and the plan is to bring him back sometime next week.

This shortens the bullpen for this critical series and we saw firsthand last night what happens when Joe has to stray away from his top high-leverage guys.  Kelley has been really good this season and without him in that righty setup mix it could mean more innings for Joba or (gulp) Phil Hughes.  Hopefully they get some better starting pitching these next 3 games to lessen the need for good middle relief.
Posted by Unknown at 8:30 AM No comments: 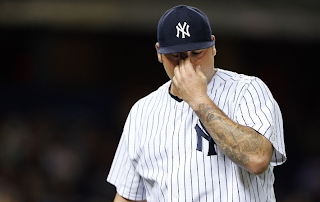