The bullpen was supposed to be a strength again this year.  The Yankees came into Spring Training with the core seven guys all but guaranteed roster spots, or so we thought.  As injuries in other parts of the roster mounted, and the resulting personnel moves to cover them created a 40-man roster crunch, some of those spots became less of a guarantee, and at the end of camp there was more than a bit of surprise when David Aardsma and Clay Rapada were DFA'd.  Their back end bullpen spots were given to Shawn Kelley and Cody Eppley, with Adam Warren making the cut as well as long man coverage for Phil Hughes.  With just seven games in the books, it's hardly an "end of the world" problem, but the poor performance of those late additions and the slightly surprising struggles of Joba Chamberlain and Boone Logan has me once again questioning some of those "in/out" roster decisions. 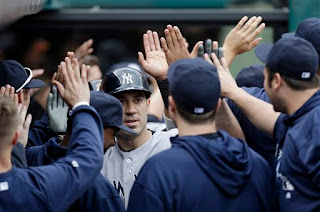